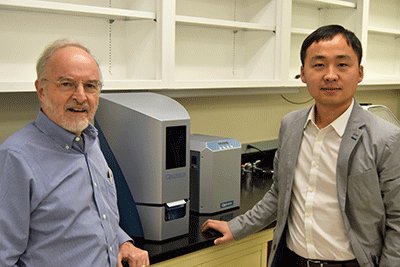 Rodney Kellems, Ph.D., left, and Wenbo Li, Ph.D., are looking for new treatments for disease at the molecular level.

Not a big believer in taking the beaten path, Wenbo Li, Ph.D., a biochemist with McGovern Medical School is searching a largely uncharted area of the human genome for new ways to fight deadly cancers.

Recruited with a $2 million grant from the Cancer Prevention & Research Institute of Texas (CPRIT) and a Rising STARs award from the UT System, Li has set up his laboratory in the Department of Biochemistry and Molecular Biology. He was previously a postdoctoral fellow at The University of California, San Diego.

Whereas most genetic research focuses on the tiny part of the genome housing the genes that contain the body’s blueprints, Li said the remaining area has information that could play a vital role in the fight against cancer.

“Cancer has long been linked to mutations in genes that are translated into proteins, the body’s building blocks,” Li said. “But, I believe that mutations in other areas also contribute to cancer. These are called noncoding regions, or dark matter.”

In his laboratory, Li is using multiple cancer models including estrogen-sensitive breast cancer cells to gauge the impact of dark matter on the production of critical genes that may influence normal cells to take a route to cancer. His research has provided new insights into the process of genome architecture and gene expression control.

In particular, he has determined how one type of such noncoding regions called enhancers turns thousands of genes off and on.

“Enhancers are like the engine of a car and they can make cars drive quickly. But once control is lost, the car just keeps going. This is kind of the same way cancer cells take off,” said Li, who emphasized that this once-assumed dark matter is being illuminated by recent advances in genome sequencing technologies.

“These studies suggest a promising therapeutic avenue to target enhancers for cancer intervention,” he said.

“His research routinely appears in journals of the highest esteem. He has recently published two authoritative reviews on enhancer RNAs, one in Nature Reviews Genetics and another in Cell Cycle.  Dr. Li adds considerable strength to the RNA biology group within our department,” Kellems said.

Li’s future studies will attempt to characterize how these noncoding disease mutations take place and how they cause human disease. Because these noncoding mutations are often found to be distinctive among individuals, Li’s research has an ultimate goal of achieving personalized medicine for each individual with unprecedented precision.

Li said he is excited to be working in the Texas Medical Center because it gives researchers like him the opportunity to translate their findings from basic biology into new therapies. “I’m grateful for the opportunity to work with Dr. Kellems and the other biochemists,” he said.

Kellems is on the faculty of The University of Texas MD Anderson Cancer Center UTHealth Graduate School of Biomedical Sciences.

To date, CPRIT has awarded $1.78 billion in grants to Texas researchers, institutions and organizations. CPRIT provides funding through its academic research, prevention, and product development research programs. The UT System Board of Regents created the Faculty Science and Technology Acquisition and Retention (STARs) Program in 2004 to help UT institutions attract and retain outstanding faculty. Awards, which can be used to purchase equipment and renovate facilities, require institutional support and are available to support the recruitment of tenure-track faculty members at any rank.