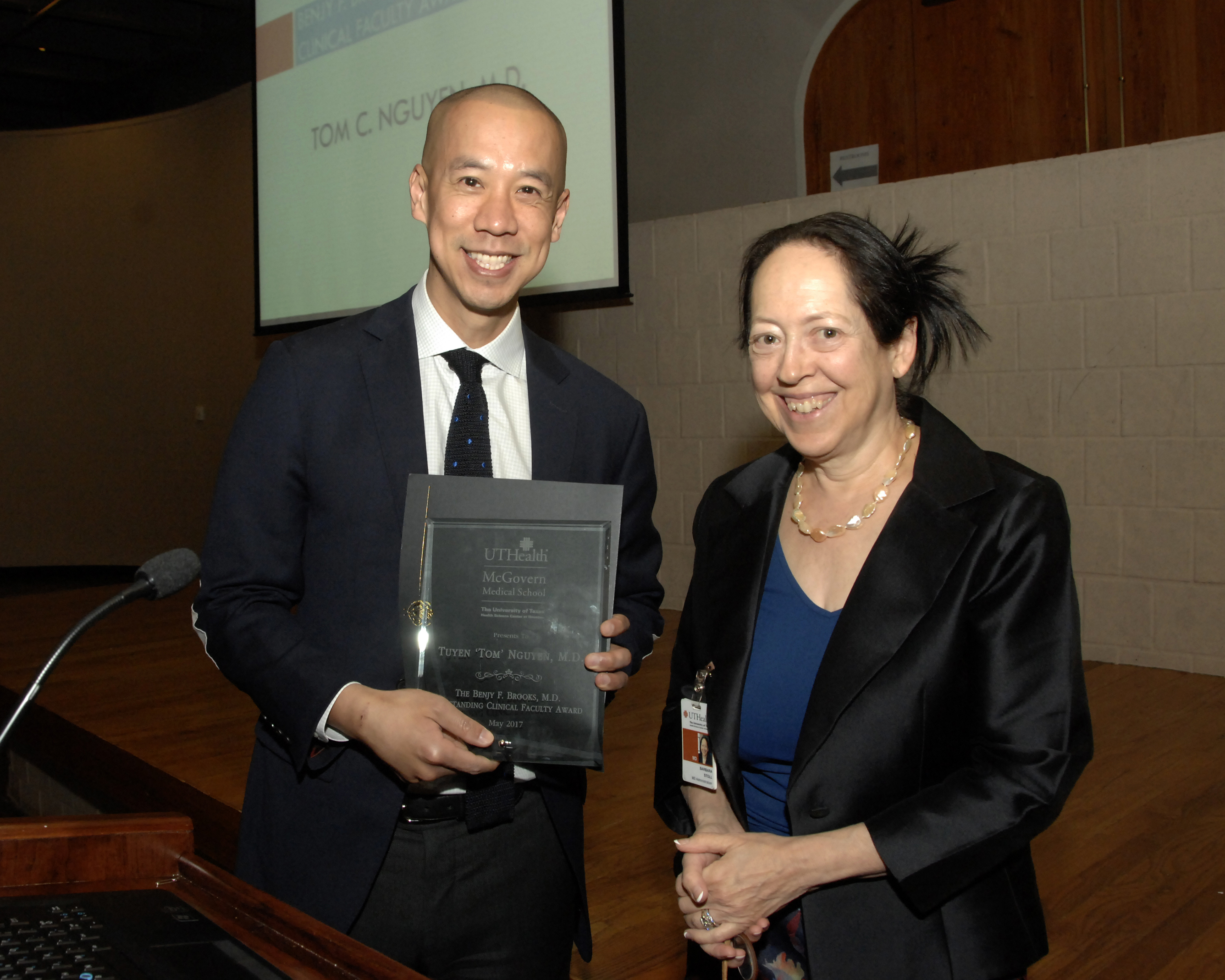 “I was completely honored, humbled, and convinced the email was sent by mistake,” said Nguyen, associate program director for the cardiothoracic surgery training program.

Established in 1991 by the Alumni Association, the Benjy Brooks award is presented by the McGovern’s Student Surgical Association to recognize individuals “who complement and enhance the education program by serving as role models for students.” It is named in honor of Dr. Benjy Brooks, the first board-certified woman pediatric surgeon in the United States, who joined McGovern Medical School’s faculty in 1973 and remained active in the life of the Medical School until her death in 1998.

Medical students may nominate faculty or residents for the award.

Nguyen says is teaching philosophy is simple: “To be a good mentor and teacher, one must be willing to self-sacrifice with respect to time, energy, and ego. Teaching is about communicating with the student in a language they understand and coaching them to be their best. This involves extra time. It will make the days longer and spill over into personal time on the weekends. Both student and teacher should feel exhausted on occasion and sometimes exhilarated.”

As far as his role model, Nguyen points to his father. “Hands down. He was an immigrant, and we came to this country with only the clothes on our back. He taught me the value of hard work, ambition, and grit.  I am who I am because of him,” he said.

Nguyen specializes in complex adult cardiac, minimally invasive valve surgery, and mitral repair. He lectures national and internationally and hosts a course for surgeons to visit and learn minimally invasive surgery. He is also an expert in transcatheter aortic valve replacement (TAVR), having performed more than 1,500 implants, and is credentialed in teaching others how to perform TAVR through the groin.

Nguyen is a native Houstonian and went to college at Rice University.  He later received his medical degree from the Johns Hopkins School of Medicine and completed his general surgery residency at Stanford University followed by a McConnell Cardiovascular Research fellowship at Stanford. He did a fellowship in cardiothoracic surgery at Columbia Presbyterian Hospital in New York and a fellowship in Structural Heart and Valve Disease at Emory.   While at Stanford, Nguyen was a recipient of the Arnold P. Gold Foundation’s Humanism and Excellence in Teaching Award by Stanford medical students.  He also was a recent recipient of the Houston’s Business Journal’s Top 40 Under 40 Award.

“I’m still incredulous that I get paid to do what I do,” he said.