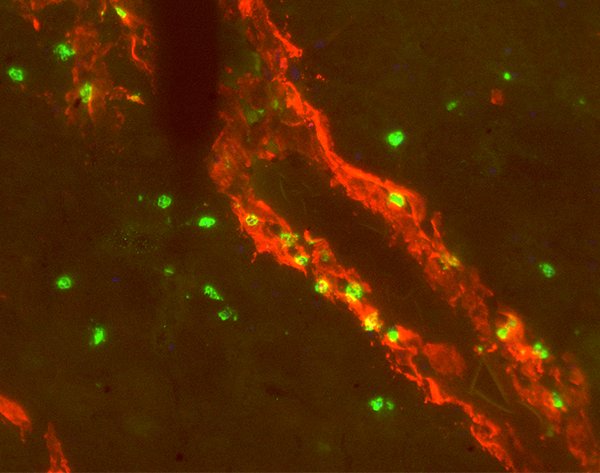 White blood cells called neutrophils are like soldiers in your body that form in the bone marrow and at the first sign of microbial attack, head for the site of injury just as fast as they can to neutralize invading bacteria or fungi using an armament of chemical weapons.

But when that injury is an intracerebral hemorrhage, which releases blood into the brain, neutrophils arrive at the point of battle only to discover that there’s no infection to attack. Unless immediately removed from the brain by other immune cells, they actually cause damage and deploy an array of toxic chemicals into the brain that worsen injury.

Now McGovern Medical School researchers have discovered a way to temporarily suppress these soldiers’ pro-killing effect and turn them into beneficial weapons that scavenge for toxins, potentially opening a door for a therapeutic approach to hemorrhagic stroke treatment.

The results of the preclinical study, led by senior author Jaroslaw Aronowski, M.D., Ph.D., were published in Nature Communications. Aronowski is professor, Roy M. and Phyllis Gough Huffington Chair in Neurology and vice-chair for research in the Department of Neurology.

A hemorrhagic stroke occurs when an artery inside the brain leaks or ruptures. It is the second-most common form of stroke after ischemic stroke, has a 30 to 67 percent mortality rate, and is the main cause of disabilities among adults. Mechanical compression of the brain, caused by blood leaking from disrupted vessels and injury from the actual blood products, is the main cause of damage to the brain.

Because half of hemorrhagic stroke victims die within the first two days, researchers believe that deadly secondary damage, including through toxicity of iron from the breakdown of red blood cells, leads to an excess in free radicals and inflammation.

Along with carrying chemicals that could aggravate injury, neutrophils produce and release potentially beneficial molecules including lactoferrin, an iron-binding protein.

At the same time the neutrophils are getting ready to attack inside the brain, the brain and spleen are releasing interleukin-27 molecules, which can signal to the neutrophils to produce more lactoferrin and thus benefit the brain as it recovers from the stroke injury.

“This is one of the first discoveries showing that you can train neutrophils to act as friendly cells. We’ve adapted how the body already responds naturally, but it can take 12 to 18 hours for the signal to turn them from damaging neutrophils to the beneficial cells that release lactoferrin and by then, it can be too late,” Aronowski said. “Treatment with lactoferrin in our models is effective in reducing brain damage after hemorrhage, and we are working on a modified form of lactoferrin that could penetrate the brain better and quicker.”