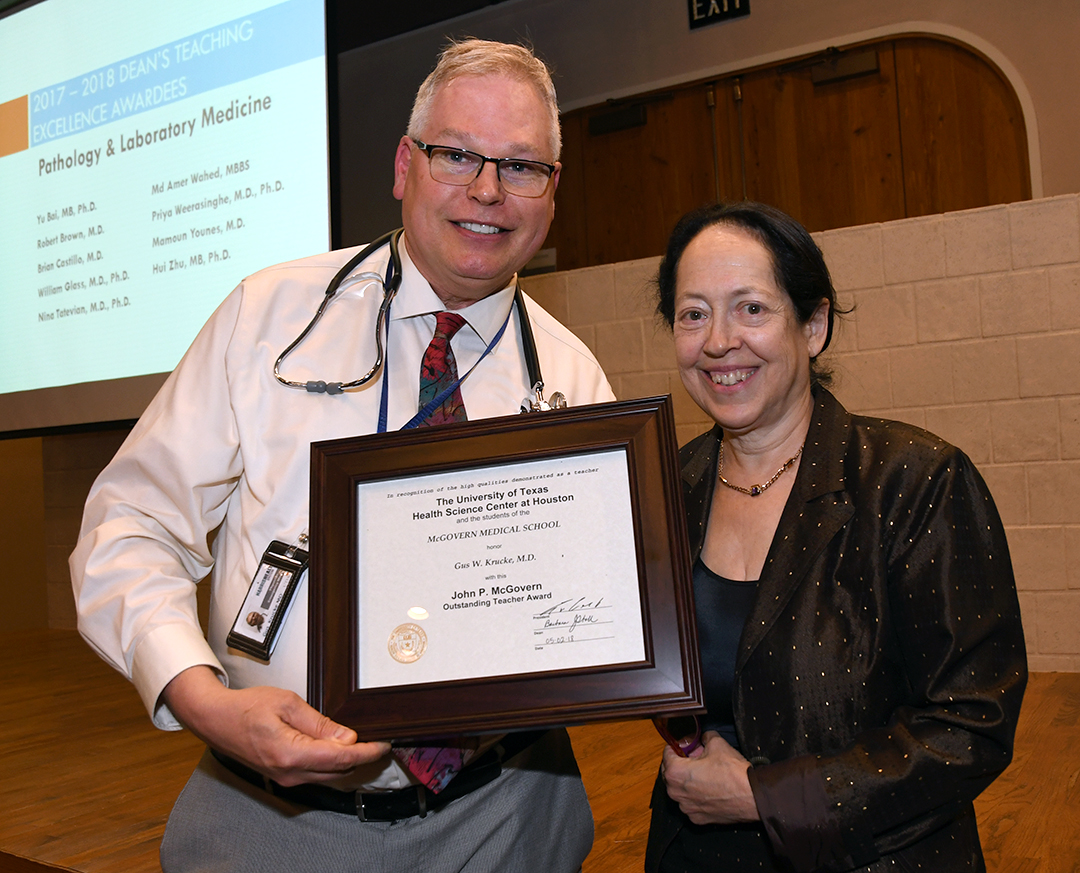 Dr. Gus Krucke said he is consistently surprised by the level of dedication of his students in becoming physicians, and felt honored to be receive the John P. McGovern Award.

The John P. McGovern Award is given annually to the outstanding clinical faculty member as chosen by the senior class. The award is made possible by an endowment from the McGovern Foundation. Faculty may not win the award in consecutive years.

Krucke, who is specialized in Internal Medicine and Emergency Medicine with 30 years of service and expertise in the areas of HIV/AIDS and palliative care, said he was honored and grateful to be this year’s recipient and he has been consistently surprised by the level of dedication his students have shown in becoming physicians.

“I have a great sense of wonder and amazement at the talent that our students demonstrate,” Krucke said. “They teach me more than I teach them.”

Krucke received his medical degree from the University of South Alabama College of Medicine before pursuing his residency at The University of Texas Medical Branch Galveston in 1988. He has received certifications from the American Board of Internal Medicine and the American Board of Emergency Medicine and first served as assistant professor and now associate professor of general internal medicine, having joined the division in 2002. Krucke also serves as attending physician with Harris Health System, having developed a treatment room and infusion center concept for patients living with HIV/AIDS at the Thomas Street Health Center. Thomas Street is the largest freestanding HIV/AIDS clinic in the United States which provides medical care, psychological services, and social services for patients living with HIV/AIDS. Krucke’s mission transitioned to the education of students, interns and residents at LBJ as an attending physician in internal medicine at LBJ in 2015.

Krucke previously won the Leonard Tow Humanism in Medicine Award in 2010, the GIMSPP Decade of Service Award in 2011, and other Dean’s Teaching Awards at McGovern Medical School.

Krucke serves as the medical director of Omega House, Houston’s only hospice for AIDS patients. Krucke said he feels a real passion for the care of those whose lives are coming to a close, remarking that this is his “calling” in life.

Krucke said it is also his mission to teach students, interns, residents, and colleagues about the importance of navigating a complex healthcare system as an advocate for patients.

“Physicians and students are facing a world that is largely the business of medicine,” Krucke said. “It’s getting harder and harder to do the right thing for patients in both academia and private practice.”

Among those figures that have supported Krucke the most in his mission, he named Dean Barbara J. Stoll, Dr. Carmel B. Dyer, professor of geriatric and palliative medicine, and Dr. Philip Johnson, vice-chair of internal medicine as major influences. He also said that Dr. H. Tristram Engelhardt, Jr., professor of philosophy and ethics at Rice University, and Dr. Clifford Dasco, professor of molecular cell biology and internal medicine at the Baylor College of Medicine, greatly affected his journey through medicine.

“[Dasco] was my mentor when I was a medical student at the University of South Alabama,” Krucke said. “I credit him with having persuaded me that my calling and mission was in medicine rather than law school. Without Dr. Dasco’s wisdom and support, I’d be a lawyer rather than a healer.”

Krucke said his research at the Thomas Street Health Center included work focusing on spongiotic dermatitis and cutaneous MRSA infections in those living with HIV/AIDS. Recently, he has turned his attention to ethics in medicine and has published several opinion pieces on end-of-life issues and medicine as a sacred profession whose attention has wandered away from purpose to power and profit, culminating in the greatest challenge to scientifically excellent, compassionate medicine in this half-century.

Dr. Krucke wanted to thank the graduating class of 2018 for their courage and achievement and especially for the honor of the John P. McGovern Award.

“There is no greater joy than the expectation that the students I now mentor will soon become healers,  applying through their hearts, hands, and minds the lessons I have shared with them,” Krucke said. “This is the tie that binds me to them, their patients, and to future generations of physicians and the patients who will depend on them.”