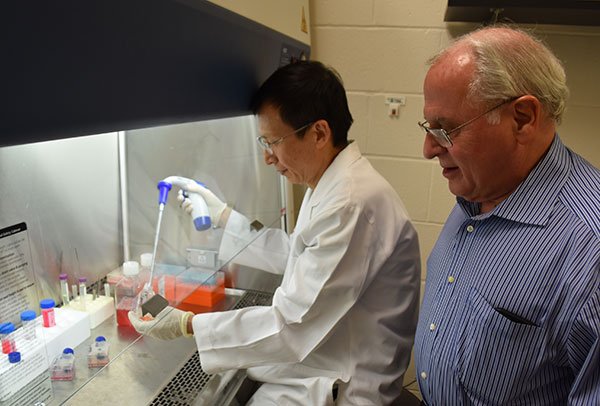 When scientists at McGovern Medical School applied a chemical found in soybeans to a non-steroidal anti-inflammatory drug (NSAID), they increased its anticancer properties and reduced its side effects. Findings of the preclinical study of phosphatidylcholine, also called lecithin, appear in the journal Oncology Letters.

“The results support the potential use of NSAIDs associated with phosphatidylcholine for the prevention and treatment of colorectal cancer,” said Lenard Lichtenberger, Ph.D., the study’s lead investigator and a professor of integrative biology and pharmacology.

The NSAID indomethacin associated with phosphatidylcholine was studied in a head-to-head comparison with three other NSAIDs (one of them aspirin). According to the results, the combination provided superior colorectal cancer protection with less gastrointestinal bleeding. The study was conducted in a mouse model and in laboratory experiments.

Colorectal cancer is the third leading cause of cancer-related death in the United States and is expected to claim 50,630 lives this year.

NSAIDs work by decreasing the production of substances that promote inflammation, pain and fever. They are used to prevent heart disease and reduce arthritis pain. NSAIDs, notably aspirin, also guard against colorectal cancer.

“Many cancers are inflammation based,” he said. “The anti-inflammatory drugs also have the potential use for cancer therapy.”

However, when taken on a daily basis for months to years, NSAIDs can cause problems, Lichtenberger said. “The intestinal injury is worse than the stomach ulcers, for non-aspirin NSAIDs like indomethacin,” he said.

“This is our latest preclinical study on the use of phosphatidylcholine to mitigate the side effects of using NSAIDs and protect against a number of cancers,” he said.

The study, titled “Chemoprevention with phosphatidylcholine non-steroidal anti-inflammatory drugs in vivo and in vitro,” was supported by National Institutes of Health grants (R03 CA171613 and R41CA171408).

Lichtenberger is on the faculty of McGovern Medical School and The University of Texas MD Anderson Cancer Center UTHealth Graduate School of Biomedical Sciences.