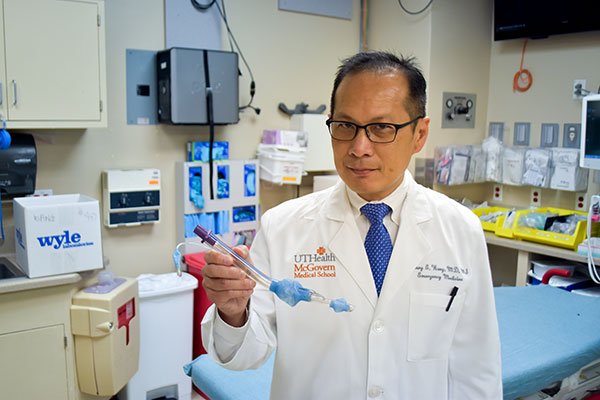 When paramedics resuscitated cardiac arrest patients with a new type of breathing tube, their patients were more likely to survive, according to a McGovern Medical School-led study in a late August edition of JAMA.

“Based upon these results, use of the newer, more flexible laryngeal breathing tube could result in thousands of saved lives every year,” said lead author Henry E. Wang, M.D., M.S., professor and vice chair for research in the Department of Emergency Medicine.

“This is one of the first randomized trials to show that a paramedic airway intervention can improve cardiac arrest survival,” said Wang, who described the study as a multicenter head-to-head comparison between the newer intubation tube and a traditional one.

Funded by the National Heart, Lung, and Blood Institute (NHLBI), the study is the largest of its kind to test oxygen delivery methods used by firefighters, emergency medical technicians and paramedics.

“For over three decades, emergency medical services personnel in the U.S. have performed intubation to deliver oxygen into the lungs of cardiac arrest victims. While identical to techniques used by doctors in the hospital, intubation in the prehospital setting is very difficult and fraught with errors,” Wang said. “Our trial showed that cardiac arrest patients treated using the newer and easier laryngeal tube device may have a higher survival rate.”

Sudden cardiac arrest, or loss of mechanical activity of the heart, is usually caused by a heart attack. More than 400,000 individuals are treated for out-of-hospital cardiac arrest each year, with the vast majority occurring at home, according to the American Heart Association. Studies show that only about 10 percent of people who suffer cardiac arrest outside the hospital survive. Delivery of oxygen to the lungs is a critical part of reviving a patient from cardiac arrest.

The study (NHLBI grant UH2/UH3-HL125163) was conducted by the Resuscitation Outcomes Consortium research network and included the Birmingham, Dallas-Fort Worth, Milwaukee, Pittsburgh and Portland communities.

While additional research is needed to support the study’s findings, the researchers believe that the benefits of the newer airway device are due to its easier technique, leading to better blood flow and oxygen delivery. They are continuing to analyze the data to gain additional insight into the study results.