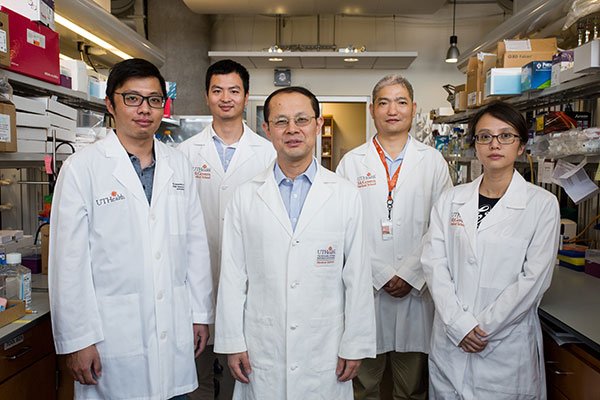 Their findings may lead to new treatments for prostate cancer, a leading cause of cancer death that is expected to claim 29,430 lives in the United States this year. The prostate is a gland that is part of the male reproductive system.

“We have discovered a molecular chain of events that is critical for the progression of hormonal-resistant prostate cancer. Importantly, inhibiting the signaling cascade slows the growth of aggressive prostate cancers in mouse models,” said Wenliang Li, PhD, senior author and associate professor with the Texas Therapeutics Institute at The Brown Foundation Institute of Molecular Medicine for the Prevention of Human Diseases.

The proof-of-concept study appears in the journal Nature Communications and was supported by the Cancer Prevention & Research Institute of Texas.

Hormonal therapy is a major treatment for the close to 170,000 new cases of prostate cancer reported in the United States every year. However, most tumors eventually build a resistance to it.

More and more hormonal therapy-resistant prostate tumors demonstrate a feature called neuroendocrine differentiation, thus called neuroendocrine prostate cancer (NEPC). NEPCs are aggressive, and the patients often die of the cancer within two years of progression. “Unfortunately, we still have very limited knowledge about NEPC, for which there is no effective treatment currently,” he said.

Li and his colleagues discovered a new critical signaling cascade for NEPC, consisting of three proteins: CREB, EZH2 and TSP1. Interestingly, they also found that this signaling cascade contributes to new blood vessel formation, which is often found in NEPC patient tumors but was poorly understood.

“Our goal was to identify key molecules that play important roles in the development of NEPC and to inhibit the molecules to block the growth of NEPC in mouse models,” said Li, who is on the faculty of The University of Texas MD Anderson Cancer Center UTHealth Graduate School of Biomedical Sciences.

They found that two proteins on the pathway – CREB and EZH2 – can be inhibited by approved drugs for heart disease and investigational drugs now in clinical trials for some blood cancers. Li and colleagues used a beta blocker approved for heart disease – propranolol, known to inhibit CREB signaling – to treat NEPC tumors in a mouse model. Scientists found that the beta blocker can inhibit the signaling cascade, reduce tumor blood vessel formation, and significantly slow down NEPC tumor growth in mouse models.

Li also found that EZH2 inhibitors in trials for some blood cancers can block the pathway and the growth of NEPC cells in culture. They plan to test the EZH2 inhibitors in mouse models. With further testing in preclinical and clinical studies, Li said he hopes that their work will pave the way to develop effective treatment for NEPC.