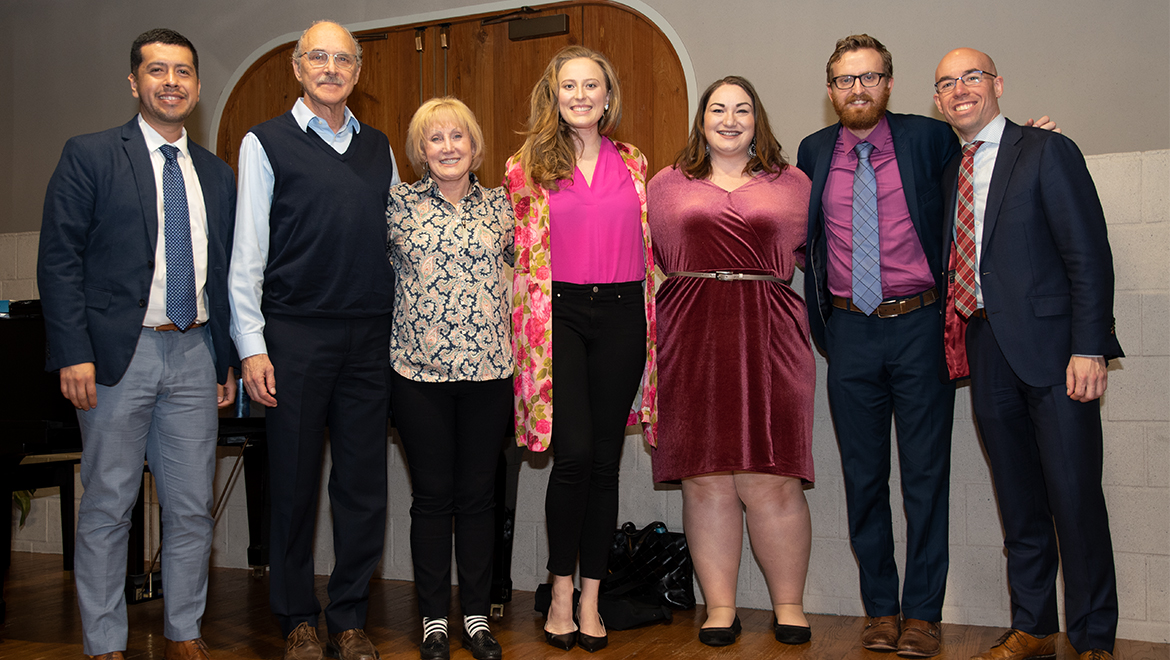 Members of the Houston Grand Opera (HGO) studio treated McGovern Medical School students, faculty, and staff to classic operatic performances as part of February’s Arts & Resilience program, a series of events designed to link the arts and humanities with medicine.

Mezzo-soprano Lindsay Kate Brown, soprano Dorothy Gal, and pianist/coach Kyle Naig performed some of their favorite pieces as part of the HGO Guild’s Artist in Residence program, which sets the goal of establishing a tradition of knowledge and support for the arts to develop audiences of the future.

Brown opened the performance with a rendition of “Ja, Gretelchen…Hurr, hopp, hopp, hopp,” the witch’s aria from Engelbert Humperdinck’s “Hansel und Gretel.” Brown said she enjoys performances such The Witch’s Aria, because they allow her to take on a different role and use acting skills that she has developed through hundreds of hours of practice.

HGO studio artists are similar to medical students in that they are continuing their education of performing arts. Brown, Gal, and Naig, who are each Fellows in the program, spend countless hours not only perfecting their craft as singers but also learning various other disciplines such as acting and sword fighting to cover a wide range of skills needed to succeed in performing arts.

Gal transitioned the show into a piece from Puccini’s “Gianni Schicchi” singing “O Mio Babbino Caro” an Italian soprano aria about a girl whose father will not let her be with the boy she loves. Gal notes that Lauretta, the singer in the piece, overreacts in typical teenage fashion, threatening to drown herself in the Arno River if she does not get her way.

Following Gal’s performance, Naig played the jazz classic “Days of Wine and Roses” on the piano. Popular in Iowa, where he is from, Naig developed a passion for the genre at a young age and displayed his skills in regular jazz fashion, going off script midway through his solo.

Gal and Brown followed Naig’s performance with a duet from Mozart’s “The Marriage of Figaro” titled “Via Resti Servita.” In the scene, Marcellina (played by Brown) and Susanna (played by Gal), deliver sarcastic insults while each trying to enter through the same door. The door symbolizes the struggle between Marcellina and Susanna as they each try to win the marriage of Fiagaro.

Though Brown and Gal have traveled different paths that led to their careers in music, each has used failure as motivation to succeed throughout their journeys. Brown realized her passion for performing arts when she realized how hurt she felt after failing to land a part for a role in college, while Gal remembers auditioning for the role of Dorothy in the “Wizard of Oz” as a child, only to receive the part of Munchkin No. 2.

So, with the memory still lingering fresh in her mind, and just to prove how far she has come, Gal ended the performance with her rendition of the “Wizard of Oz’s” classic song, “Somewhere Over The Rainbow.”

The next event in the Arts & Resilience Program is at noon, Thursday March 15 in the 5th Floor Gallery. It will focus on the harp and will feature Laurie Meister. For more information and a schedule, visit the program’s website here.