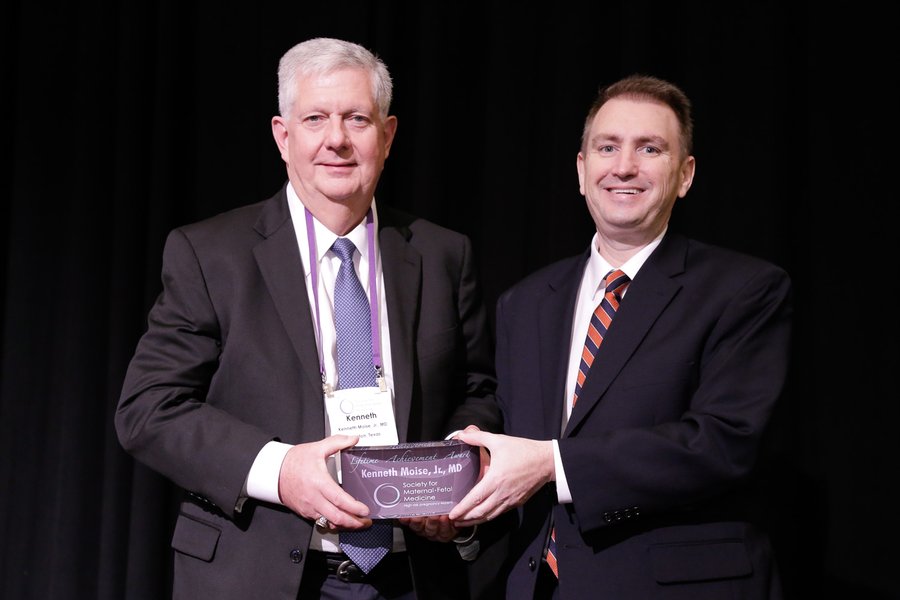 Walking into the office of Kenneth J. Moise Jr., MD, it’s hard not to notice the consistent themes: babies, children, and family. An oil painting of his three children hangs above his desk, photos of his wife are displayed proudly on the windowsill, and most notably, countless photos of babies he’s delivered over the years fill the spaces of his bookcase. And not just one-time baby pictures, but multiple photos of those babies as they grew into teens and adults, whose depictions now serve as reminders of countless lives saved and well-lived because of Moise’s work.

“Somehow families I’ve worked with always find me,” said Moise, a maternal-fetal medicine specialist at McGovern Medical School at The University of Texas Health Science Center at Houston (UTHealth). “They’re grateful that I was able to deliver their high-risk babies safely, and they do a great job of keeping me updated on their children’s lives.”

That’s why it is no surprise that Moise was the recipient of this year’s Society of Maternal-Fetal Medicine’s Lifetime Achievement Award, which is given to physicians who have made a lasting and significant impact in the field. Moise is a professor in the Department of Obstetrics, Gynecology, and Reproductive Sciences and Department of Pediatric Surgery at McGovern Medical School at UTHealth and co-director of The Fetal Center at Children’s Memorial Hermann Hospital in collaboration with UT Physicians.

Moise describes the day he won the award as one of the best of his life.

“For me personally, this award was a recognition of the things I value most, which are clinical research and contributing to the field by training the next researchers,” Moise said. “I know that when I pass, I will only leave behind my children, the written word, and my trainees, so it’s imperative for physician-researchers like myself to pass the baton to others. There are many other people across the country deserving of this award, but it means the world to me that the Society of Maternal-Fetal Medicine chose to recognize me for the mark I have made.”

Moise was one of the researchers who helped discover that Doppler ultrasonography could be used as a way to noninvasively detect fetal anemia, a technique that has since been widely adopted throughout the world for the past two decades. Before using the technology this way, doctors would have to perform an amniocentesis, where they would insert a needle into the uterus to collect amniotic fluid for testing, almost every week during pregnancy to detect when the fetus was becoming anemic.

“This special ultrasound has saved a lot of babies’ lives because they’re not being put at risk of being stuck with a needle,” Moise said. “We’re able to detect their likelihood for fetal anemia by simply looking at the speed of the blood moving through the middle cerebral artery. If it is more than 1.5 times the normal rate, we know that anemia could be present.”

Moise also helped discover a way to use cell-free DNA from maternal blood to accurately predict the fetal blood type in all three trimesters of pregnancy. The technique helps detect dangerous incompatibility between the blood proteins, or Rh, in mother and baby that can cause severe anemia and jaundice.

It is breakthroughs like the development in the Doppler ultrasound and cell-free DNA that Moise hoped to realize when he entered academic medicine.

“I always thought I would go into private practice, but I realized during my fellowship that going into academic medicine would allow me to push the envelope to make health care better through research,” Moise said. “If you’re not at the head of the pack, the view never changes. Academia puts us at the head of the pack of innovation and improvements in health care. I operate on babies before they are born – 30 years ago I never would have thought that would be a reality. That’s the fun part of academics; we are truly changing the geography of health care.”

Moise was instrumental in the formation of two other university-associated fetal centers prior to joining UTHealth and The Fetal Center in September of 2011. Over the last eight years, he has made advances in the field with twin-to-twin transfusion, prenatal diagnoses, and open fetal surgical repair for spina bifida.

“Kenneth Moise has dedicated his career to maternal-fetal medicine and to ensuring that women with high-risk pregnancies have the best possible outcome,” said Barbara J. Stoll, MD, dean and H. Wayne Hightower Distinguished Professor in the Medical Sciences at McGovern Medical School. “The Lifetime Achievement Award is extremely well-deserved, and it is an honor to have someone as accomplished as Dr. Moise serving as a professor at McGovern Medical School and the co-director of The Fetal Center. We are proud of all Dr. Moise’s accomplishments and lifesaving work.”

Previous winners from UTHealth include Baha M. Sibai, MD, professor in the OB-GYN department, who won the Lifetime Achievement Award in 2014. Sean C. Blackwell, MD, chair of the Department of Obstetrics, Gynecology, and Reproductive Sciences at McGovern Medical School and president of the Society for Maternal Fetal Medicine, presented this year’s award at the society’s annual conference held in Las Vegas.

“It was a huge honor to be able to present such a significant achievement on a national stage to one of our own,” said Blackwell, who holds the Emma Sue Hightower Development Board Professorship and The Berel Held, MD, Professorship in the Department of Obstetrics, Gynecology, and Reproductive Sciences. “The opening ceremony was made even better by Dr. Moise being completely surprised when he won the award. We are grateful to have him on our faculty at McGovern Medical School, ensuring our patients have the best clinical outcomes and helping to train the next generation of physician-researchers.”