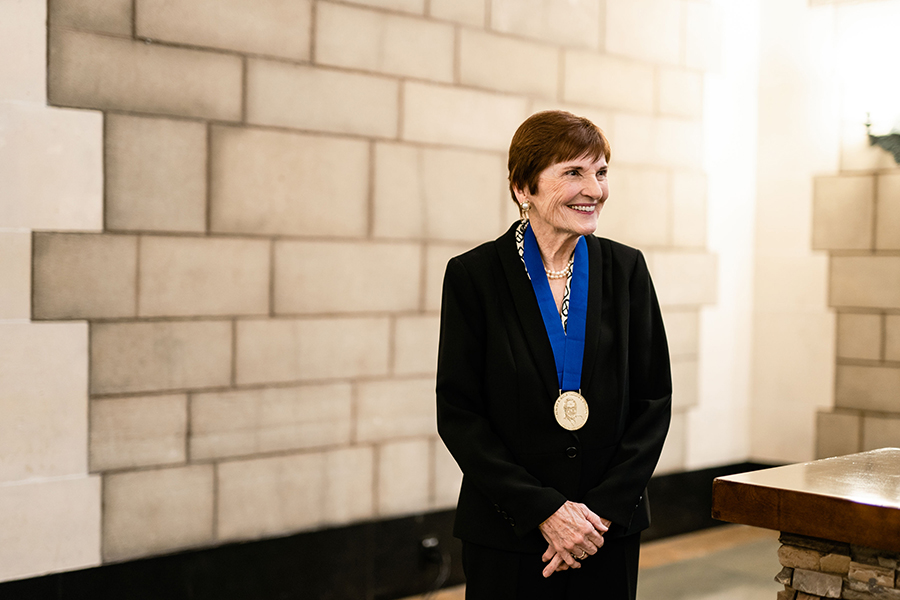 The Sabin Vaccine Institute (Sabin) presented its annual Albert B. Sabin Gold Medal to Carol J. Baker, MD, adjunct professor of pediatrics, whose groundbreaking research in group B Streptococcus (GBS) is accelerating progress toward a much-needed vaccine to prevent a bacterial infection that can cause lifelong illness or death in newborns. The award was presented at the 26th annual Albert B. Sabin Gold Medal Ceremony, at the National Academy of Sciences Building in Washington, DC.

Carried without symptoms by approximately one in four healthy pregnant women, GBS can cause long-term health problems in babies, such as deafness, blindness or developmental disabilities from meningitis. About five percent of infants who develop GBS disease will die. As a result of Baker’s revolutionary research and advocacy, pregnant women in the United States and some European countries are now routinely screened for GBS carriage and antibiotics are used during labor to prevent transmission to their babies.

Baker’s discoveries about the relationship between infant GBS and maternal immunity, paired with her international advocacy work, have also led to the development of a much-needed vaccine, with candidates currently in clinical trials. She continues to work toward her ultimate goal of preventing this newborn disease through immunizing the mother during pregnancy.

A highly accomplished infectious diseases clinician, teacher and vaccinologist, Baker is known as “the Godmother of group B Streptococcus prevention.” Recognized for her work at a time when many physicians were against vaccinating expectant mothers, Baker’s advocacy for maternal immunization shaped a new medical culture in the United States, enabling doctors to save the lives of countless newborns.

Baker continues to advocate for the health of mothers and babies, such as shepherding the recommendation for routine pertussis booster vaccines for pregnant women while chairing the U.S. Centers for Disease Control and Prevention (CDC) Advisory Committee on Immunization Practices from 2009 to 2012.

“Dr. Baker’s pioneering work in group B Strep resulted in a more than 80 percent reduction of neonatal disease in the United States and her research is paving the way for the development of a long-overdue vaccine for this disease,” said Amy Finan, Sabin’s chief executive officer. “Each year, we select someone whose career exemplifies Dr. Sabin’s legacy – to ensure the benefits of vaccines reach every child. Today, we are glad to recognize not only a gifted researcher, but a champion who has made it her mission to ensure every baby gets a healthy start. Her life is a testament to the fact that real changes in immunization practices occur when research is paired with dedicated advocacy.”

Baker has authored or co-authored more than 400 peer-reviewed papers and book chapters. Notable among these is her work on the book, Vaccine-Preventable Disease: The Forgotten Story, where, alongside other respected vaccine experts, she highlighted the stories of innocent children who have suffered needlessly from vaccine-preventable diseases.

“I am honored to be awarded the distinguished Albert B. Sabin Gold Medal alongside fellow recipients whose work has saved so many lives,” Baker said. “I never planned to be a researcher. I became a doctor to help one patient at a time, but what I found was a calling to use the knowledge gained through research to advocate for life-saving interventions for mothers and babies. I sincerely thank the Sabin Vaccine Institute for the incredible honor of this award.”

The award was presented to Baker by Roger I. Glass, MD, PhD, director of the Fogarty International Center, 2015 recipient of the Sabin Award and husband of Dean Barbara J. Stoll, MD.

Awarded annually since 1994, the Albert B. Sabin Gold Medal recognizes champions who have made extraordinary contributions in the field of vaccinology or a complementary field. The award commemorates the legacy of Dr. Albert B. Sabin, who developed the oral polio vaccine that made monumental contributions to the near eradication of polio worldwide, then worked tirelessly to ensure the vaccine reached children around the world. Past Gold Medal recipients include Dr. Paul Offit, Dr. Anne Gershon and the late Dr. Maurice Hilleman, among many other distinguished vaccine experts.

An infectious diseases clinician, teacher and vaccinologist, Dr. Carol Baker’s discoveries about GBS immunity and pathogenesis helped shape the 1996 CDC consensus guidelines for routine GBS screening among pregnant women. Formerly the president of Infectious Diseases Society of America (IDSA) and the National Foundation for Infectious Diseases, she chaired multiple working groups within CDC’s Advisory Committee on Immunization Practices over the course of many years.

Active on numerous editorial boards, Dr. Baker has worked on five editions of the American Academy of Pediatrics’ Red Book (2000-2015), which provides reliable and clinically useful information on more than 200 childhood infectious diseases. She has received many honors and awards, including the Maurice Hilleman Award from the CDC; the Mentor, Society Citation and Alexander Fleming Lifetime Achievement awards from the IDSA; the Distinguished Physician Award from the Pediatric Infectious Diseases Society; and the Schneerson-Robbins Award in Vaccinology.

Baker earned a bachelor’s degree in English from the University of Southern California and received her medical, residency and fellowship training at Baylor College of Medicine and Harvard University.

The Sabin Vaccine Institute is a leading advocate for expanding vaccine access and uptake globally, advancing vaccine research and development, and amplifying vaccine knowledge and innovation. Unlocking the potential of vaccines through partnership, Sabin has built a robust ecosystem of funders, innovators, implementers, practitioners, policy makers and public stakeholders to advance its vision of a future free from preventable diseases. As a non-profit with more than two decades of experience, Sabin is committed to finding solutions that last and extending the full benefits of vaccines to all people, regardless of who they are or where they live.

The 2019 Albert B. Sabin Gold Medal ceremony was made possible in part by the Bill & Melinda Gates Foundation and Pfizer.