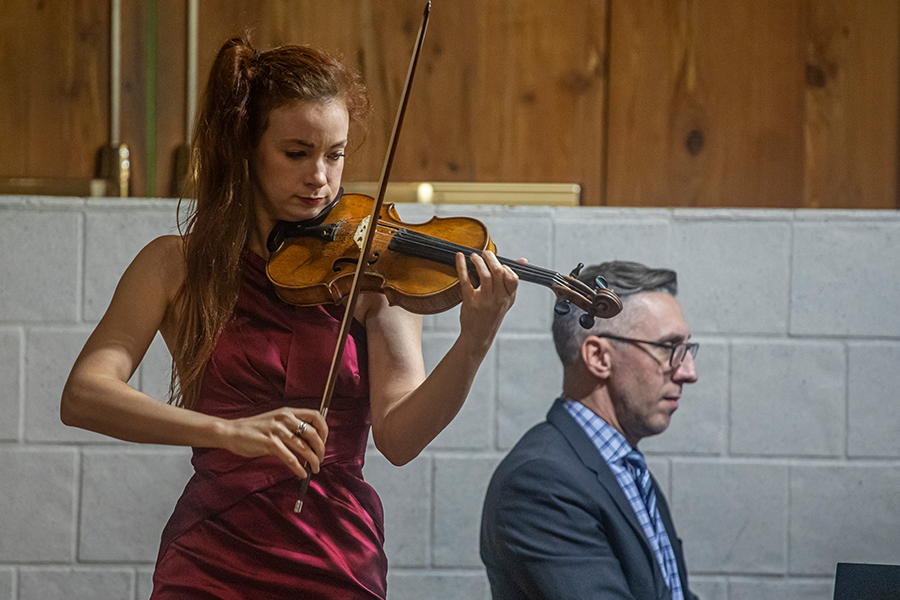 Violinist Chloé Trevor and pianist Michael Zuraw treated McGovern Medical School students, faculty, and staff to an afternoon of music for violin and piano with their show “Exotic Blooms” as part of the Arts & Resilience program Oct. 10 in the Fifth Floor Gallery.

Zuraw serves as the president and artistic director of Aperio, Music of the Americas, a Houston-based ensemble dedicated to presenting unique chamber music in performances that showcase contemporary composers of the Americas.

Trevor was the silver medalist of the 2008 Ima Hogg Competition and has appeared as a soloist with orchestras worldwide, including the Hong Kong Sinfonietta, Latvian Chamber Orchestra, Slovak State Philharmonic, and the Knoxville Symphony.

The duo opened their show with a song from Bela Bartok’s “Six Romanian Dances.” A Hungarian composer, Bartok was one of the founders of comparative musicology, which later became ethnomusicology. Zuraw noted that Bartok’s music has a flavor that is completely different than traditional classic music.

The next piece in the performance was Johannes Brahms’ “Sonata in G Major.” The three-movement composition features beautiful themes that are similar to songs you would hear in folk dancing.

Zuraw and Trevor paid tribute to a local legend with their third piece called “Sueños de Chambi,” by Gabriela Lena Frank. Frank graduated from Rice University and used her heritage ties, her father was Jewish and her mother was Peruvian, throughout her music. “Sueños de Chambi,” was composed in honor of seven photographs taken by Peruvian photographer Martín Chambi.

The next installment of the Arts & Resilience program features Raa-Raa Carter and the Zydeco Accordian at noon Nov. 21 in MSB 3.001. The program is sponsored by the Dean’s Office in collaboration with the McGovern Center for Humanities and Ethics. For more information and a schedule, visit the program’s website here.