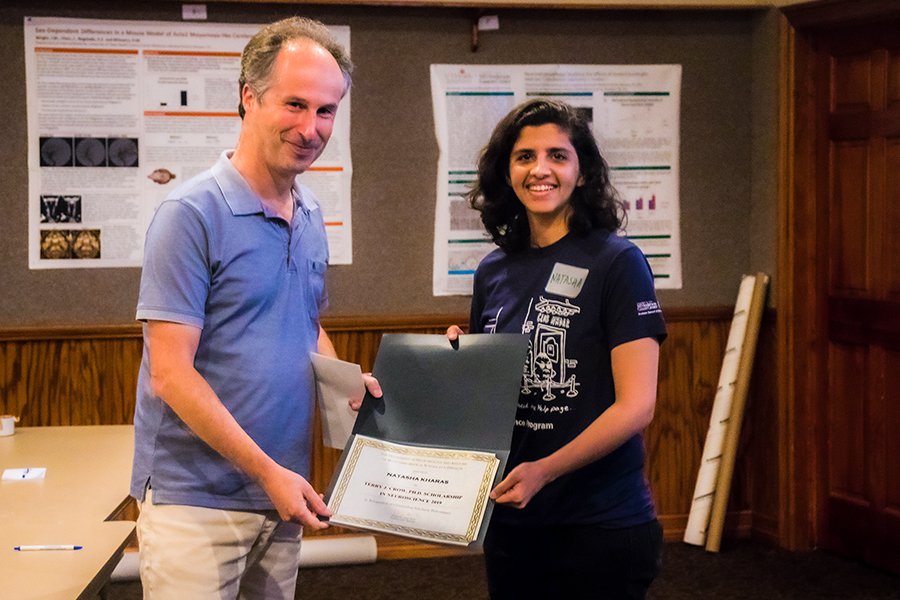 Natasha Kharas, MD/PhD candidate in the laboratory of Valentin Dragoi, PhD, in the Department of Neurobiology and Anatomy, is the second recipient of the Terry J. Crow, PhD Scholarship in Neuroscience.

Kharas received the scholarship for her outstanding scholastic performance and was presented with the award Oct. 4 at the Neuroscience Graduate Program student retreat, held at The Retreat at Artesian Lakes, in Cleveland, Texas.  The scholarship provides support in the amount of $1,750.

Kharas’ interest in neuroscience began during her undergraduate studies at New York University, where she studied the molecular mechanisms of Fragile X Syndrome. She graduated with a bachelor’s degree in neuroscience, and post-graduation she studied olfaction at Columbia University. She also worked on neuroscience patents at Philon, Inc. in New York before moving to Houston to start her MD/PhD studies at McGovern Medical School. Kharas’s projects evaluate the influence of spontaneous activity in local cortical circuits on behaviors such as perception and sleep.

The Terry J. Crow, PhD Scholarship in Neuroscience was established in honor of the late Crow, professor emeritus in the Department of Neurobiology and Anatomy at McGovern Medical School. Crow studied the cellular and molecular mechanisms of learning and memory. He made seminal contributions to the field, for which he received both national and international recognition. In addition to Crow’s substantial contributions to the research activities of the medical school, he also was a renowned educator who, during his 27-year tenure, contributed significantly to the institution’s academic mission. He was recognized as one of the best lecturers by medical students and was the recipient of the Dean’s Teaching Excellence Award for 18 years.