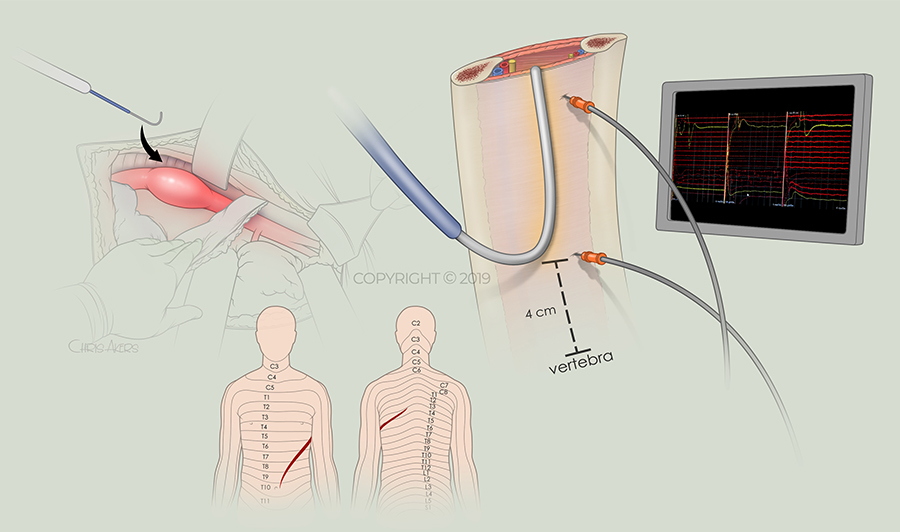 The figure created by Chris Akers, MA, is the featured image on the cover of the January 2020 edition of the Annals of Thoracic Surgery. The image accompanies the paper published by Akiko Tanaka, MD, PhD.

Figure, paper, featured on cover of Annals of Thoracic Surgery

In the current state of the medical field, one of the hot-button issues for both researchers and physicians alike is pain management. Local anesthetic can briefly numb the pain but wear off too quickly, and opioids can manage pain for longer periods but come with major consequences down the road.

Recent research published in the Annals of Thoracic Surgery from Akiko Tanaka, MD, PhD, integrated vascular surgery resident in the Department of Cardiothoracic and Vascular Surgery, in her paper titled “Intraoperative intercostal nerve cryoanalgesia improves pain control after descending and thoracoabdominal aortic aneurysm repairs,” shows there may be a better way to manage pain for the largest incision a patient will ever receive during surgery.

Tanaka’s research focuses on patients undergoing descending and thoracoabdominal aortic aneurysm repairs. The incision starts at the upper back and travels down and around to the belly button.

“In Japanese, we call it a cut by the sword,” Tanaka said. “It’s a really large incision, and we have a lot of trouble controlling pain afterwards. You have to cut through ribs and muscles that you use whenever you breathe or walk, so it’s very painful for the patient.”

Intraoperative intercostal nerve cryoanalgesia utilizes a probe that uses nitrogen frozen to -20 degrees Celsius. The device, which is commonly used by cardiac surgeons for ablation surgery but only recently was approved for nerve block, freezes the intercostal nerve, which runs along the ribs.

On the 28 patients who received the treatment, Tanaka’s research found that median ventilation hours in patients undergoing cryoanalgesia were significantly shorter (five hours vs. 12 hours), while opioid use was significantly decreased after the fourth day postoperative. Additionally, pain score also was improved and narcotic use was less in the cryoablation group compared to the control group.

“It turned out to have a great outcome,” Tanaka said. “I thought we should publish the data, so that more people could benefit from it, but the number of patients was so small. It’s hard to get published with such a small number.”

Therefore, Tanaka turned to Chris Akers, MA, the medical illustrator for the Department of Cardiothoracic and Vascular Surgery, to design a figure to draw more attention to the research.

Tanka met with Akers and gave him a quick sketch of what she was looking for in the figure. After back-and-forth exchanges between the two, Akers produced a descriptive figure for the surgery that was selected as cover image of the journal.

Akers graduated from Ohio University with a bachelor’s degree in biological sciences before earning his master’s degree from UT Southwestern in biomedical communications.

“I’ve always enjoyed art but equally enjoyed science, so this is the perfect combination,” Akers said. “I have the ability to be creative but still scientific. It’s nice to be able to help and teach people through my art.”

The research and accompanying illustration was published in the January 2020 issue of The Annals of Thoracic Surgery.