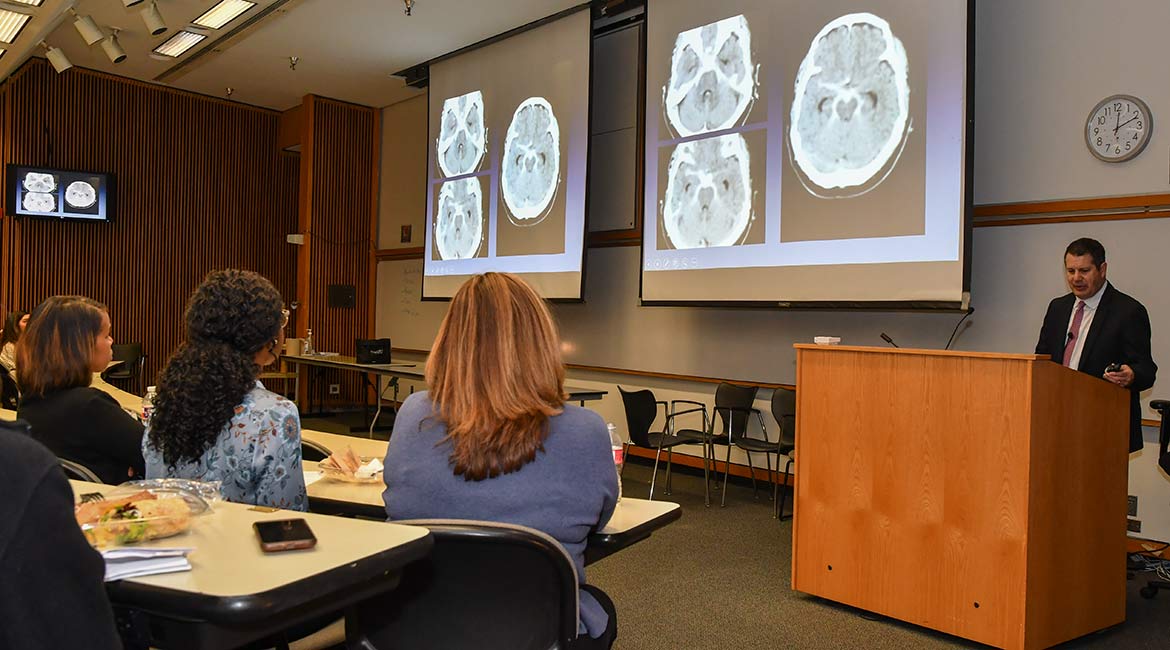 Dr. Evan Cohn presents “When a Doctor Becomes a Patient,” as part of the Disability Awareness Lecture Series.

Everyone gets sick and plays the role of a patient at some time in their lives. Even doctors.

Evan Cohn, MD, a radiologist from Dallas, experienced this role reversal in a most severe manner when he suffered a subarachnoid hemorrhage in Virginia in 2015 as he and his wife celebrated their 24th wedding anniversary.

Cohn shared his story, “When a Doctor Becomes a Patient,” as part of the Disability Awareness Lecture Series presented by the Office of Diversity and Inclusion Jan. 29.

A radiologist for 22 years, Cohn said he learned that “life can change in an instant.” While enjoying his vacation, he experienced an abrupt onset of headache, nausea, and sweating. A trip to the emergency room and subsequent CT scan showed he had a brain bleed. The rural hospital did not have the necessary specialists on site, so he was shuttled by helicopter to the University of Virginia (UVA) hospital.

“After I took the medicine in the helicopter, I don’t remember anything for the next two weeks,” he said.

Those next two weeks were spent at the UVA hospital. His injury was acutely life-threatening with a 50 percent mortality rate. “The nurse told my wife I could die,” he said.

Following discharge he was driven back to Texas by his wife and brother. “Family became my advocates, and the chaplains were a big support,” he said.

Returned home, he spent the following year in rehabilitation with physical therapy, occupational therapy, and speech therapy – 6.5 hours a day. His goal was to return to work as a radiologist.

With continued symptoms of fatigue, cognitive issues, and headaches, he made the decision to officially retire in January 2017. “My mistakes could be deadly,” he acknowledged.

Cohn said he has a new grateful perspective on life and realizes he does not know how his story will end.