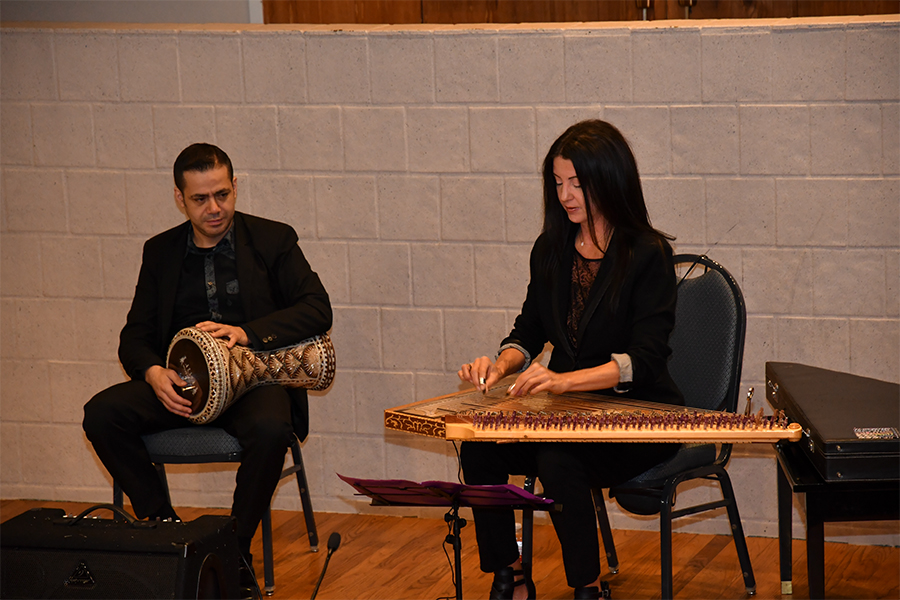 Erin Foster plays the qanun while George Halwani accompanies her on the tombak as part of the “Middle Eastern Music” performance of Arts & Resilience.

The origin of the qanun, a string instrument played throughout much of the Middle East, Maghreb, West Africa, Central Asian, and southeastern Europe, is believed to trace back to Ancient Greece or even earlier times, however the modern adaption of the instrument dates to around the ninth century.

The qanun features 72 strings stretching from five pillars to turning pegs on the far end of the instrument and traditionally has a goat or fish skin cover over the sound chamber. During the Ottoman Empire, levers were added to help the musician create and control the scale of the maqam, or system of melodic modes used in traditional Arabic music.

Foster was accompanied by percussionist George Halwani, who specializes in playing the oud. The oud is a short-neck, string instrument that resembles a lute with origins tracing back to the first and third century. The oud is similar to the lute in style, however one major difference is that the oud has no frets to play microtones.

The duo took turns playing traditional Arabic music featuring their respective instruments, while also accompanying one another with a tombak, the principal percussion instrument of Persian music. Foster played the qanun for songs like “Los Bibilikos” a traditional Sephardic folk song, while Halwani played the oud for “Fog ElNahkel,” “Qadouk Al Mayas,” “Hali Ha,” and “Al Bul Bul.” The series of songs on the oud is based on Syrian poetry that is well known and popular in the region.

The next installment of the Arts & Resilience program features Daniel Saenz and John Noel and “Estrellita: Classical Music from Mexico” at noon March 19 in the Fifth Floor Gallery. The program is sponsored by the Dean’s Office in collaboration with the McGovern Center for Humanities and Ethics. For more information and a schedule, visit the program’s website here.