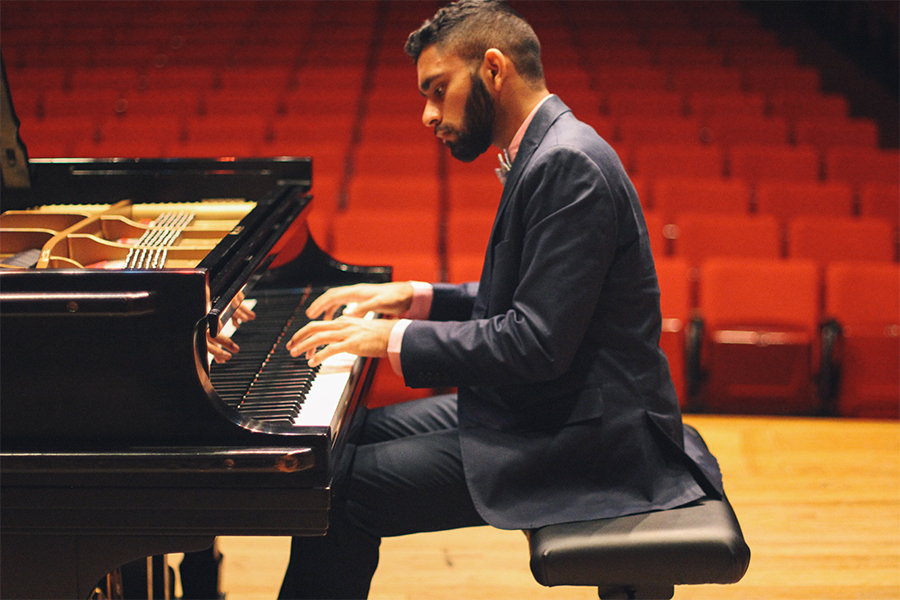 Second-year medical student Timothy George turns to the piano when not focused on studies.

With one of the major discussions in health care centering on the well-being of physicians and combating burnout, there is a growing need to find a solid work-life balance and to separate each facet of life.

However, for second-year medical student Timothy George, his free-time passion is also a valuable tool in helping relieve the stress both himself and patients. When he isn’t spending his spare time with his three-year old boxer mix Valentina, George is learning, or perfecting, new music on the piano.

George, the music president for the Art and Music in Patient Care (AMP) program at McGovern, taught himself how to play the piano when he was 12 years old. After being inspired by a song played by his junior high choir teacher, George watched YouTube videos, mimicked the movements, and began to play.

“That kind of went well,” George said. “After that, I basically looked for more resources online and taught myself the basics, and then two years later I started taking lessons.”

Two years after that, George enrolled in lessons at the local community college in Pasadena, Texas, and was encouraged by his teacher to major in music at the university level.

“I actually knew I wanted to be a doctor in high school, so I started out as a piano performance and premed major at UT Austin,” George said. “I knew I loved science, and I wanted to learn more about the human body, but I also wanted to put that to use and actually help people.”

Prior to medical school, George participated in the pre-entry program at McGovern, where Patricia Butler, MD, vice dean for Educational Programs asked if he would play at the program for the closing luncheon. The  following spring semester, he assumed the role of music president of the AMP.

As president, George organizes and participates in opportunities and rehearsals for medical students to perform music across various genres in patient settings. Performing most often in Methodist Hospital’s Crain Garden Series, the program includes both solo and ensemble pieces as well as lyrical performances as well.

“It’s really rewarding, and it’s nice to be able to add something to the lives of people who are just walking by and probably going through something not enjoyable if they’re in the hospital,” George said. “The first time we played at Methodist, a patient’s wife came up to us afterward and said that we just blessed her and made her day. Her husband was having open heart surgery and it had been a horrible day for her. Her day was uplifted because of the music that we were able to make.”

Recently, George organized a trip for 60 McGovern Medical School students to attend a night with the Houston Grand Opera. Ranked as one of the top companies in the nation, George and the students were thrilled for the opportunity to see performances at such a high level.

“I would love to do more of that,” George said. “It really enriches our medical school experience. My classmates loved the performance. The music was fantastic, all the performers were amazing, and it was just really nice to sit back, relax, and enjoy top-notch entertainment.”

Although George’s term as music president of the AMP will end shortly, he said he is looking forward to continuing to make music a part of his life.

“I’m very satisfied whenever I’m helping people in a medical way,” George said. “With music, it’s kind of a synergistic effect being able to do both at the same time in a medical setting.”

The AMP was founded in 2017 and is sponsored by Claire Hulsebosch, PhD, professor in the Department of Neurobiology & Anatomy.