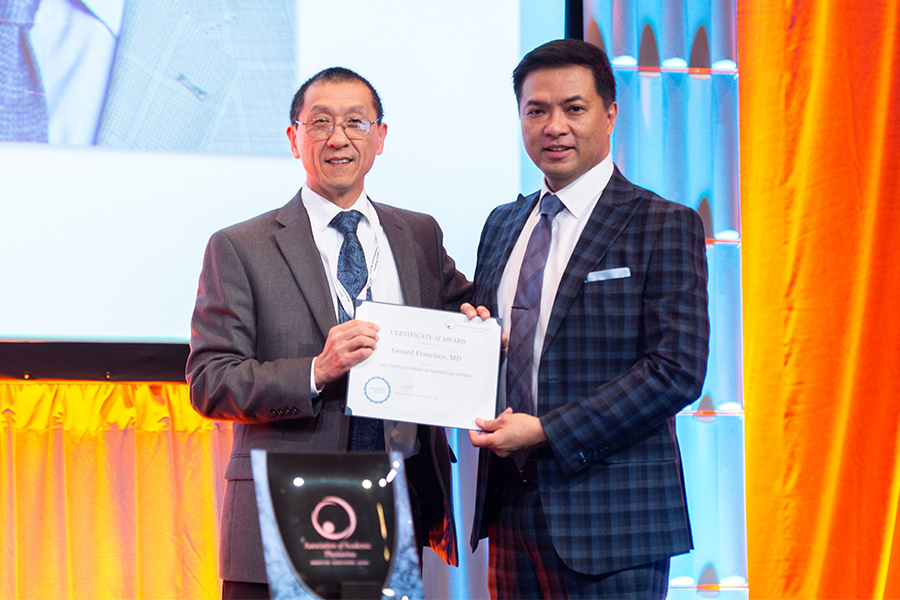 The Association of Academic Physiatrists (AAP) has named Gerard E. Francisco, MD, professor and chair of the Department of Physical Medicine & Rehabilitation (PM&R) as its 2020 Distinguished Academician.

Francisco received the award for achieving distinction and peer recognition by virtue of excellence as a teacher, researcher, and administrator. Winning members of the AAP received their awards at the 14th ISPRM World Congress and 53rd AAP Annual Meeting March 8, in Orlando, Fla.

Francisco serves as the chief medical officer of TIRR Memorial Hermann Hospital and is the director of the UTHealth Motor Recovery Lab and the Spasticity Treatment Research Center (S.T.A.R) at TIRR. His research spans various areas including robotic therapy in persons with incomplete spinal cord injury and intrathecal baclofen and botulinum toxins for spasticity.

Since 2001, Francisco has been listed in the annual “Best Doctors in America” and has received several Dean’s Teaching Awards from UTHealth and also the Physical Medicine and Rehabilitation Alliance of Baylor College of Medicine and UTHealth Teacher of the Year Award.

Francisco served as the president of the AAP from 2015-17 and currently holds office with various national PM&R associations. He is also a member of specialty organizations, including the ACGME Residency Review Committee for PM&R.

Francisco received his medical degree from the University of the Philippines College of Medicine in 1989 and completed a postdoctoral fellowship in brain injury rehabilitation at Baylor College of Medicine. He joined the Brain Injury Program at TIRR Memorial Hermann in 1997.