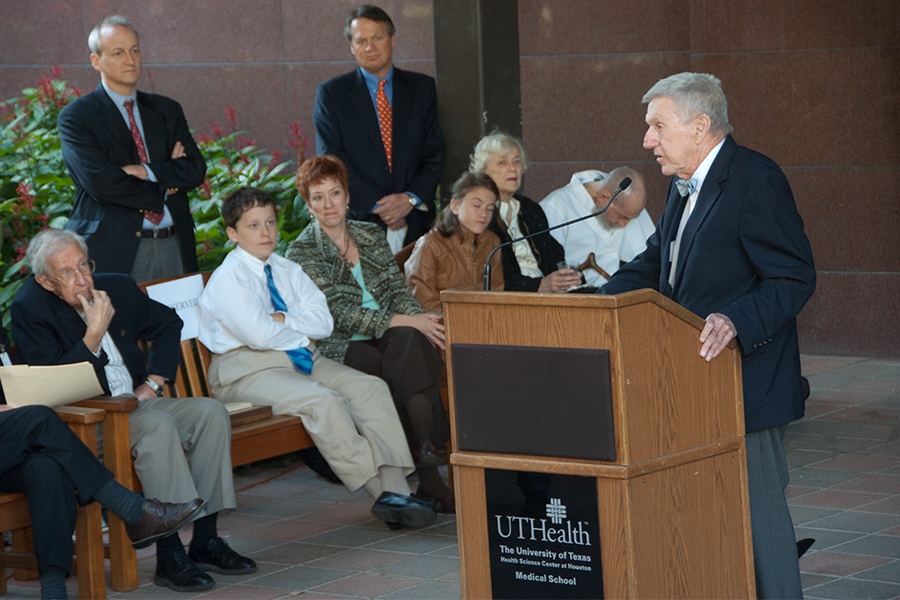 Cheves Smythe, MD, gives remarks at his retirement ceremony at the Medical School in 2011.

Cheves McCord Smythe, MD, founding dean of McGovern Medical School, died May 11, 2020, in Charleston, South Carolina, at the age of 95.

Born May 25, 1924, in Charleston, Smythe graduated from Harvard Medical School. During the Korean War, he was assigned to the Naval Medical Field Research Laboratory, Camp Lejeune, in North Carolina, and was responsible for a variety of applied research ventures relative to military medicine.  He trained at Bellevue Hospital in New York City and at the Boston City Hospital, where he was chief resident.

His passion for academic medicine was evidenced in his leadership of three medical schools. He is remembered fondly by colleagues not only as a leader but as a friend.

“Dr. Smythe was a pillar of our Medical School community — known for his exemplary standards in medicine, education, and leadership,” said Giuseppe N. Colasurdo, MD, president of UTHealth and Alkek-Williams Distinguished Chair. “As our founding dean, he helped define the principles and the promise of McGovern Medical School and, for 50 years, he delivered on that promise with an unwavering commitment to our students and our school.”

“Dr. Smythe was a true southern gentleman,” recalled Richard Andrassy, MD, executive vice dean of Clinical Affairs, Cooley Chair in Surgery, Mayfield Distinguished University Chair in Surgery, and Ruiz Distinguished University Chair. “He knew how to get things done and built a new medical school from the ground up. His intellect, caring personality, and energy made him very successful. I enjoyed my interactions with him on all levels.”
As first dean, Smythe was responsible for recruiting the school’s first chairs, faculty, and students and overseeing the construction and planning of facilities. Faculty who were among the first to join the medical school recalled those early days.

“As The University of Texas Medical School’s first dean, Cheves Smythe was innovative,” remembered Herbert DuPont, MD, professor of infectious diseases. “He did not have departments but called the school’s administrative units programs that he wanted to integrate both vertically with divisions and horizontally across programs. He was charismatic, attracting outstanding faculty to Houston as full professors and heads of programs before there were permanent school buildings, or a medical school curriculum and all left a tenured faculty and accepted non-tenured positions in Houston. He used his instincts to make key decisions and took chances, like offering me the job as director of infectious diseases and clinical microbiology at the new school when I was 33 years of age and lacked administrative experience. Under his leadership his ‘mission impossible’ team built the beginnings of the medical school. It was a special time and Cheves’ unique qualities were responsible for the school’s early success.”

“Dean Smythe interviewed me for a faculty job at the new medical school in January 1972,” recalled Nachum Dafny, PhD, professor of neurobiology and anatomy. “I was impressed by his personality, energy, open mindedness, and deep intellectual integrity. He convinced me to come to Houston, and I did not regret it. His office was open to everyone; he was a good listener. He read every grant the faculty wrote and provided ideas how to improve it.  He was a devoted fisherman and invited every faculty to go fishing with him. I was lucky to go with him on his boat to fish many times. Once a year he gathered all the faculty to his house to have a party to eat all the fish he and the other faculty caught. He created a camaraderie atmosphere that I miss.”

“Cheves was a superb leader and administrator, clinician (he likely saved my life), educator (promoted an interdisciplinary curriculum among other now current innovations), raconteur…and fisherman, who was uniquely qualified to be the founding dean of our medical school. His profound early positive impact on the school, and on me and other naive young junior faculty members was immense. Dean Smythe’s legacy continues,” said Gary Rosenfeld, PhD, associate dean for educational programs and professor of integrative biology and pharmacology.

“Cheves was a visionary who forged the foundation upon which our school developed into a leading clinical, research, and education institution in Houston and the nation,” said William Dowhan, PhD, professor of biochemistry and molecular biology and John S. Dunn Endowed Chair.

Smythe wrote in his memoirs of recruiting the Steinbergers as the first faculty to the Medical School.

“I have very fond memories of Cheves McCord Smythe,” Anna Steinberger, PhD, said. “He was a great visionary medical educator! It was not too difficult for him to convince Emil (Emil Steinberger, MD) that we should move to join the faculty of the newly created UT Medical School in Houston, of which he served as first dean. The challenge of participating in this new venture was irresistible, so we came in 1971 and became involved in planning the curriculum, laboratory spaces, recruiting additional faculty members, etc., etc., years before the school acquired a permanent building. We loved our jobs and all these challenges! We also got to know Cheves more personally by sharing social events and sailing on our sail boat, EPIA  (he always caught a fish for our dinner on the boat). Cheves has made valuable contributions to promoting medical education. May his memory be a blessing.”

“Dr. Cheves Smythe was a man for all seasons. In his memoir, An Advantaged Life, Cheves tells the story of his beloved ancestors, his upbringing in Charleston, SC, his passionate eclectic pursuits, and his seminal and lasting contributions to medicine and to McGovern Medical School.  In his inimitable style, he provides frank assessments of the many events and people he encountered during his illustrious career. We were both members of the ‘deans club.’ This led to a special relationship that bound us together.  I will always remember him for his spirit, character, sage advice, and commitment to professional and personal excellence,” said L. Max Buja, MD, professor of pathology and laboratory medicine who served as dean of the medical school 1996-2003.

“It was my privilege to work for Dr. Cheves McCord Smythe when he was dean from 1971-1976.  The office was very busy as medical students were being selected, curriculum was being planned, faculty was being recruited, and the two-story Freeman Building was in process,” Sondra Ives recalled.  “Dr. Smythe kept everything moving.  While he was not one for praise, you worked hard to rise to his unspoken expectations.  He was a physician’s physician, a Charlestonian through and through, a fisherman, a sailor, father of five sons who you knew he loved, husband to Polly and a creator of medical schools.  My life is enriched for having known him.”

During leaves of absence from the Medical School (1982-85 and 1990-91), Smythe also served as founding dean, professor of medicine, and chair of the Department of Medicine at the Aga Khan University of Health Sciences in Karachi, Pakistan.

Karim Marani, director of the Learning Resource Center, recalled, “Dr. Smythe’s contributions were wide and internationally renowned. As founding dean of the now Aga Khan University, Medical College, Pakistan, he built an infrastructure that enabled it to become an international university today, with campuses in Pakistan, the United Kingdom, and countries in East Africa. It was at that time that Dr. Smythe gave an opportunity to conceptualize the university’s audiovisual and library facilities. Today, both the McGovern Medical School and the Aga Khan University are shining examples of his multifaceted legacy. Dr. Smythe, you are gone but not forgotten, rest in peace.”

Smythe’s contributions to the McGovern Medical School spanned more than four decades. After serving as dean for the Medical School’s first five years, he returned to the faculty as professor of internal medicine. He was asked to revisit to the dean’s office as dean pro-tem in 1995.

“I am very fortunate to have been hired as chair by Dr. Smythe while he was the interim dean,” said Carlos Moreno, MD, C. Frank Webber Chair in Family Medicine.  “He was honest and straightforward and very helpful during my first several years as chair. He provided me with excellent insight and advice about the history and politics of the Medical School and the University. A wise and insightful man. This medical school is built on his shoulders.”

Smythe also served as chief of medical services at LBJ General Hospital and was certified in geriatric medicine as well as internal medicine. He was recognized as a devoted and appreciated teacher of clinical medicine, strengthening medical teaching at Lyndon Baines Johnson Hospital as well as assisting in the development of the geriatric medicine program. The annual Cheves Smythe Distinguished Lecture was established in 2006 and brings distinguished speakers to campus who focus on topics related to aging.

“After all of his institutional and scientific contributions, I believe he felt his greatest contribution was as a clinician in the care of the underserved. Until his retirement, he spent tireless hours interviewing and caring for our patients at LBJ and demonstrating for all of our students and housestaff, how to tease out the essence of who the patient was, what they wanted, and how best to treat them to achieve their goals. When you read his brief narratives, you can easily picture the patient and understand his remarkable ability to bond with them. I guess they just don’t make them like that anymore,” said Philip Orlander, MD, associate dean for educational programs and Edward Randall, III Chair in Internal Medicine.

“Cheves was an innovative educator as well as an outstanding administrative leader,” George Stancel, PhD, recalled.  “All our student and resident alumni have benefited enormously from his foresight, innovation, and commitment to education that set a tone maintained to this day.  He was also a teacher and mentor to the faculty — his wisdom, friendship, example, and concern greatly enriched our personal as well as professional lives.”

Before his retirement from the Medical School in 2011, Smythe had been recognized numerous times for his teaching, clinical excellence, and humanism with the Master Teacher Award, the Humanism in Medicine Award, and the Benjy Brooks Award for Clinical Excellence, among many others.