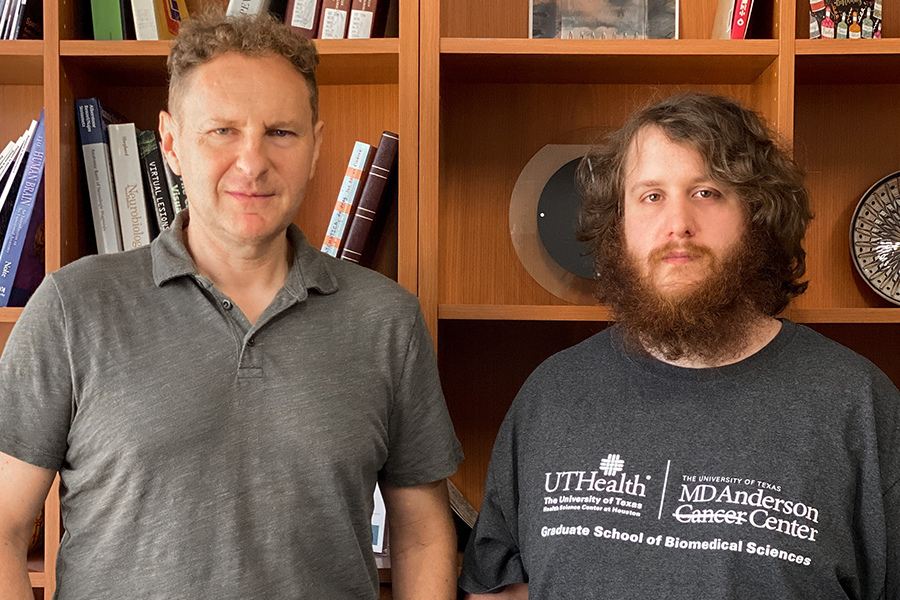 Pioneering research on the study of complex functions of the brain from the lab of Valentin Dragoi, PhD, Rochelle and Max Levit Distinguished Professor in the Neurosciences, has been published in Nature Communications. His paper is entitled “Dynamic states of population activity in prefrontal cortical networks of freely-moving macaque.”

Traditional studies of the brain on nonhuman primates are performed in a set laboratory environment which requires restraint of the head and body while stimuli are presented to animals on a computer monitor.

“It has become increasingly understood that studying the brain in a restrained laboratory rig poses severe limits on our capacity to understand the function of brain circuits,” said Dragoi, a faculty member associated with Program in Neuroscience at the MD Anderson Cancer Center at UTHealth Graduate School of Biomedical Sciences. “When responses of individual neurons are measured in naturalistic settings, they often tend to be different compared to when they are measured in the laboratory.”

Instead of confining the primates to the lab, Dragoi’s team developed a novel wireless system that allows for the study of cortical dynamics while nonhuman primates are able to move throughout their natural environments. With this system, the lab collected both behavioral and oculomotor events as well as neural data from two, non-human primates while they freely explored naturalistic habitats and while they slept. Data was accumulated through chronic electrode array implants in the dorsolateral prefrontal cortex (dlPFC).

Their study reported that putative inhibitory neurons react differently than putative excitatory cells regardless of brain state. That is, putative inhibitory neurons exhibited stronger synchronizing fluctuation in population activity than excitatory neurons to suggest that slow fluctuations in population activity that are ubiquitous in any brain state are primarily controlled by inhibition. With the wireless system they built, the lab will be able to study phenomena such as foraging, sleep, or social behavior, that are difficult or impossible to capture in a laboratory rig.

“We are the first group to integrate wireless neural recordings, wireless recording of oculomotor variables, and behavior using an integrated system,” Dragoi said. “This can potentially allow us to study dysfunctions of neural network activity and their role in explaining dysfunctions of sleep, social behavior, and attention.”

The research was funded by the prestigious NIH Pioneer Award and the NIH BRAIN Initiative. The first author of the study is Russell Milton, PhD candidate at MD Anderson UTHealth Graduate School who is funded by a NIH/NEI F31 pre-doctoral fellowship, while second author is Neda Shahidi, PhD, postdoctoral fellow at University Medical Center in Gottingen, Germany.