The UT System Board of Regents created the Faculty Science and Technology Acquisition and Retention (STARs) Program in 2004 to help UT institutions attract and retain outstanding faculty. Awards, which can be used to purchase equipment and renovate facilities, require institutional support and are available to support the recruitment and retention of tenure-track faculty members at any rank. 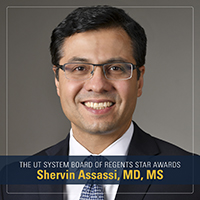 Assassi, professor in the Department of Internal Medicine, received $1,000,250, through the Translational Retention STARs award, given for the recruitment or retention of nationally recognized leaders in translational and clinical sciences.

The director of the Division of Rheumatology and Clinical Immunogenetics, Assassi also co-leads the Scleroderma Program at UTHealth, which houses the largest specialized systemic sclerosis scleroderma clinic and research program in the region. Assassi has been at the forefront of research for the molecular basis and developing clinically relevant biomarkers for scleroderma, a multisystem autoimmune disease that has the highest mortality among major rheumatic diseases.

Assassi has co-authored over 150 peer-reviewed manuscripts and has had his work cited more than 750 times each year in the last three years. He is currently the principal investigator of the NIH-R01, NIH-61, and Scleroderma Research Foundation Awards and has served as first- or senior-author of seven manuscripts over the past six months. He has won McGovern Medical School Dean’s Excellence in Teaching Awards in 2009, 2010, and 2014. 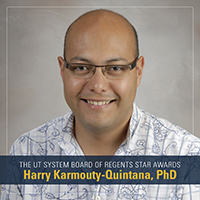 Karmouty-Quintana, assistant professor in the Department of Biochemistry and Molecular Biology, was also awarded the Translational Retention STARs Award, earning $300,000 for the upcoming fiscal year.

Karmouty-Quintana serves as the director for the UTHealth Pulmonary Center for Excellence Tissue Bank, which with more than 160 explanted lungs from patients undergoing lung transplantation is one of the largest such resources in the country. He is also a member of the Executive Committee for the Pulmonary Center of Excellence, as well as the Center for Perioperative Medicine, and has established a Texas Medical Center (TMC) Lung Biology Seminar Series to bring the TMC lung research community together.

Karmouty-Quintana received his PhD in pharmacology and biophysics from King’s College London and as a joint venture between King’s College London and Novartis Pharmaceuticals in Basel, Switzerland. He completed a postdoctoral fellowship at McGill University in Canada in 2010 before joining McGovern Medical School as a postdoctoral fellow to study the role of adenosine signalizing in pulmonary hypertension. In 2012, he was named assistant professor of biochemistry and molecular biology. In 2015, he became assistant professor on tenure-track, and as of 2020, he has a cross-appointment at the Divisions of Critical Care, Pulmonary and Sleep Medicine at UTHealth. 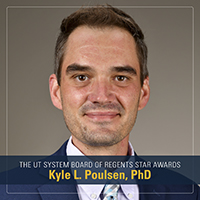 Poulsen, assistant professor in the Department of Anesthesiology, garnered $250, 000 with a Rising STARs Award for the recruitment of promising faculty members who are recruited in a tenure track position at any academic level. He joined the McGovern Medical School faculty after serving as a postdoctoral research fellow and research associate at the Lerner Research Institute in Cleveland, Ohio.

An emerging expert in the study of liver disease, with a primary focus on alcohol-related etiology of liver morbidity and patient mortality, Poulsen’s research centers around the understanding and involvement of specific immune factors in liver injury. At McGovern, Poulsen will focus on macrophage migration inhibitory factor.

In his young career, Poulsen has published research in a number of prestigious journals such as the Journal of Hepatology, and earned the Ruth L. Kirschstein National Research Service Award Individual Postdoctoral Fellowship (Parent F32), which helped enhance his research training, before winning the 2018 NIH K99/R00 Pathway to Independence Award.

Poulsen received his PhD as part of a dual degree program in pharmacology and toxicology and environmental toxicology from Michigan State University in 2013.