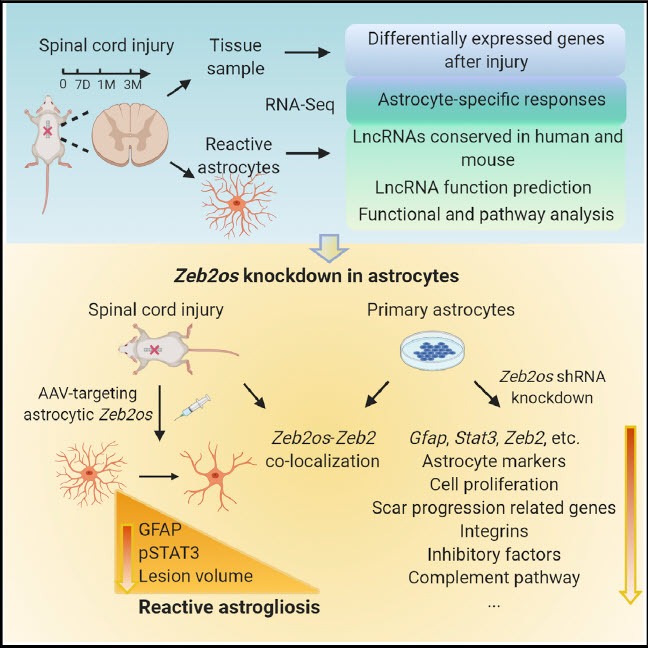 New research from the lab of Jiaqian Wu, PhD, associate professor in the Vivian L. Smith Department of Neurosurgery and the Center for Stem Cell and Regenerative Medicine, on reactive astrocytes in spinal cord injury may lead to future therapeutic targets to ease the process of neural regeneration.

The research titled, “Systematic analysis of purified astrocytes after SCI unveils Zeb2os function during astrogliosis,” was published in the February edition of Cell Reports.

Qilin Cao, PhD, associate professor in the Department of Neurosurgery & Center for Stem Cell and Regenerative Medicine,  is a co-author of the paper.

One of the main obstacles in regeneration of spinal cord injuries is a physical barrier (termed astrogliosis)  that generates with scaring. After a spinal cord injury, astrocytes and other cell types begin to form a scar barrier to prevent the spread of damage to the spinal cord tissue.

“It’s a good thing at the beginning, because it restricts the spread of injury, but then later on they become a physical barrier for when we try to regenerate and connect the neurons,” Wu said. “It is very difficult for axons to grow through this physical barrier.”

In the study, the lab purified the astrocytes from the scar tissue of an injured preclinical model to study the gene expression, or how things have changed before and after injury in the astrocytes. The goal of studying astrocytes is not only to find therapeutic targets to make the regeneration environment easier, but to also not have the astrocytes abandon their ability to help retrain damage.

“Astrocytes in adult spinal cord are difficult to purify,” Wu said. “We spent several years trying to get this technique down, and we finally made it work.”

Using genomic technology, the lab was able to record the gene expression of astrocytes at a genome-wide scale, investigating both coding and long non-coding RNA, to discover how genes changed from before injury to the acute stage after injury, and also more chronically several months after the injury.

“Seventy to 90 percent of the genome is transcribed into RNA at some point during development; however, less than two percent of the genome represents protein-coding genes. In recent decades, there are studies starting to show that long non-coding RNA have very important functional roles everywhere in the body, especially in the central nervous system. However, long non-coding RNA functions in spinal cord injury is very understudied” Wu said. “People have been trying to find a cure for spinal cord injury, but so far have not been successful. Targeting long non-coding RNAs greatly enlarges the number of druggable targets and facilitates new classes of mechanistic discoveries.”

“We found that the gene is kind of a switch. Once you knocked it down, reactive astrogliosis is significantly decreased after spinal cord injury,” Wu said.

In follow-up functional analysis of Zeb2os knock-down in preclinical models, the lab found that the lesion volume was reduced, but also showed a reduction in phosphorylated STAT3. STAT3 is a well-known gene that is key in scar formation.

“If you get rid of STAT3, then there’s no scar formation after spinal cord injury,” Wu said. “That means we found Zeb2os is regulating a very important aspect of the astrogliosis phenomena.”

The discovery could potentially serve as a therapeutic target for spinal cord injury, because manipulating this gene at later stage of spinal cord injury could have a beneficial effect on reducing inhibitory factors of scar tissue and thus improve behavior recovery. This is the goal of our next stage of study.

“Of course, there’s no black and white division; anything in biology is not black and white,” Wu said. “At the beginning, scar is a good thing, but then after some time the positive almost becomes negative. That’s why we had to study them in a time course to find out how they have changed. We have just also published a paper in Nature Neuroscience with the leaders in the field on Reactive Astrocyte Nomenclature, Definitions, and Future Directions that is very relevant to this topic.”