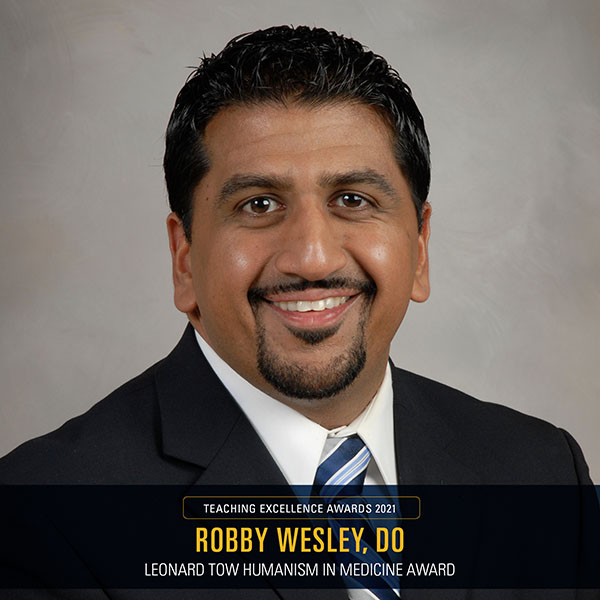 Robby Wesley, DO, associate professor of medicine, has been named the recipient of the 2021 Leonard Tow Humanism in Medicine Award, presented by the Arnold P. Gold Foundation.

The Leonard Tow Humanism in Medicine Award annually honors faculty who are exemplary in their compassion and sensitivity in the delivery of care to patients and their families, who administer scientifically excellent clinical care, and who serve as role models to students.

Wesley received the news of his award while being inducted into the Academy of Master Educators via Cisco Webex. Wearing the classic virtual meeting dress code of coat and tie on the top half, and shorts on the bottom, he said he was completely thrown off by hearing the award as Phillip Orlander, MD, read his bio.

“A truly humbling moment,” Wesley said. “I feel reassured that my failures haven’t completely condemned me. I am perfectly imperfect. I have lost my temper or had a bad attitude depending on the day. I am equally flawed as the next person. Through God’s grace, He has allowed me to get beyond myself and try to offer assistance to my patients or my learners. It’s helped me realize the impact we can have on others despite our internal struggles.”

Wesley, the associate program director for the Internal Medicine Residency, said his teaching philosophy is to provide resident and student learners with the right tools to meet their educational styles to succeed.

“Although testing is often standardized, the methods for our learners to accumulate, synthesize, and apply knowledge is nothing but standardized,” he said. “Over the past decade, I have enjoyed discovering the style of learning that has helped learners overcome the labels of ‘poor test taker’ and find personalized learning methods to improve their journey in adult learning.”

Wesley drew mentorship from the late Herbert Fred, MD, who often quoted Béla Schick, MD, who said, “‘First, the patient, second the patient, third the patient, fourth the patient, fifth the patient, and then maybe comes science. We first do everything for the patient; sciences can wait, research can wait.’ I thank Dr. Fred in stressing the importance of the patient from my days as a resident to my time as a faculty as well.”

He also thanked Orlander for his continued mentorship year after year with guidance in his professional life, and Philip C. Johnson, MD; John Foringer, MD; and the late Carmel Dyer, MD; for always finding opportunities to get him out of his comfort zone, as well as his professional mentors who continue to teach him how to be successful even in the times of professional struggle or failure.

“I would also like to thank my residents and students,” he said. “I have definitely learned more from them than the teaching I have provided to them.”

Wesley received his doctorate of osteopathic medicine from the University of North Texas Health Science Center-Texas College of Osteopathic Medicine in 2007 before completing a residency in internal medicine at McGovern Medical School. He joined the Division of General Medicine as a chief medical resident in 2010 before becoming assistant professor in 2011.