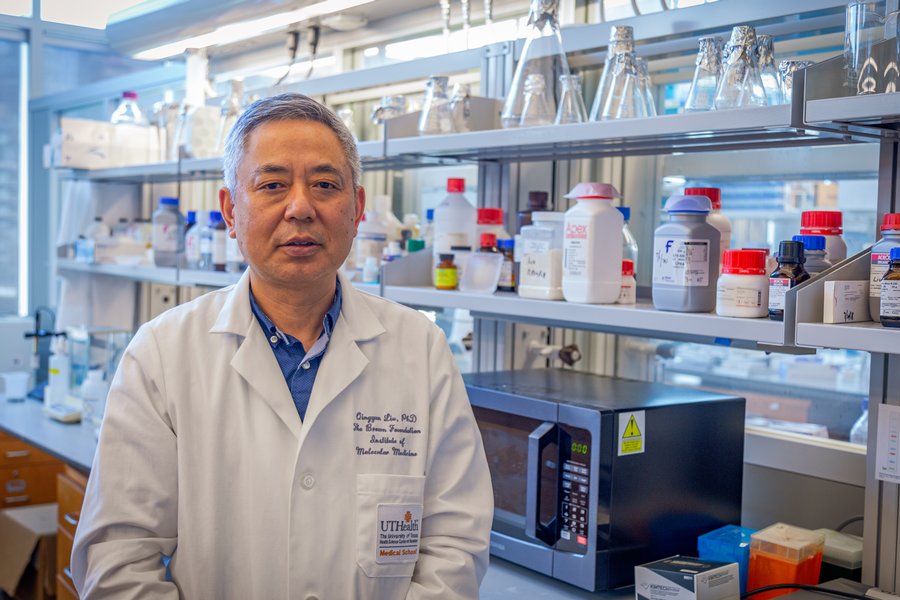 A preclinical development core where researchers can test the effectiveness of large molecule drug candidates for novel cancer treatments, led by Qingyun Liu, PhD, has been awarded a nearly $4 million grant from the Cancer Prevention and Research Institute of Texas (CPRIT).

Liu is professor of precision biomedicine with the Brown Foundation Institute of Molecular Medicine for the Prevention of Human Diseases (IMM) at The University of Texas Health Science Center at Houston (UTHealth), as well as faculty at the MD Anderson UTHealth Graduate School of Biomedical Sciences.

The Core Facility Support Award from CPRIT funds projects that aim to support cancer research efforts throughout Texas. Liu’s project was among 12 to receive this type of award from CPRIT, and it secured one of the highest grant amounts overall.

Because UTHealth already has a core facility that supports the discovery of antibodies to treat cancer, Liu said the new core facility will mark the next step in determining which therapeutics are viable for the treatment of colon, breast, lung and other types of cancer.

“This is an essential part of drug discovery,” said Liu, the Janice Davis Gordon Chair for Bowel Cancer Research at McGovern Medical School at UTHealth. “Getting this grant really helps us push our drug candidates to the next level by increasing our chance of seeing whether they will work in cancer patients.”

Currently, monoclonal antibodies are the predominant form of cancer drugs. However, researchers have found a new class of therapeutics called antibody-drug conjugates (ADCs) – the combination of monoclonal antibodies and cytotoxins – to also be effective in combating cancer. Both antibodies and ADCs are considered large molecule drugs due to their large molecular size, and their discovery and development is rapidly gaining momentum throughout the state.

Generally, the core facility will allow researchers to advance their large molecule drug leads beyond the proof-of-concept stage by evaluating a drug candidate’s safety, stability, and efficacy. The principal investigators will be able to have pharmacokinetic analysis and toxicology studies performed on their drug leads at this core facility, which will help them select the right candidate for further development or out-licensing.

“Stability is important – you want to make sure the therapeutic can stay in the body for a while, because it won’t work if it disappears too quickly. We also want to assess what level of a drug candidate can be tolerated without severe toxicity,” Liu said. “That window is what we’re always trying to define for cancer research.”

The core activities will take place within IMM at UTHealth, as well as the Michale E. Keeling Center for Comparative Medicine and Research at The University of Texas MD Anderson Cancer Center in Bastrop, Texas.

The grant was among 73 issued by CPRIT in its latest round of funding, which altogether totaled more than $142 million. Other grant winners from UTHealth Houston included Kendra Carmon, PhD, assistant professor of precision biomedicine at IMM; Sheng Pan, PhD, associate professor of precision biomedicine at IMM; and Jeffrey Frost, PhD, professor in the Department of Integrative Biology and Pharmacology at McGovern Medical School. Pan and Frost are also faculty members of MD Anderson UTHealth Graduate School. All three faculty members received High Impact/High Risk Grants.