Thanks to chain of survival programs like Texas-CARES, Dalyce Bradshaw was saved from cardiac arrest by her husband and a colleague 8,500 miles away.

Dalyce Bradshaw died and came back to life one ordinary morning this past spring.

“The utmost in gratitude that I’m alive today,” Bradshaw said during a recent video conference at the Department of Emergency Medicine at McGovern Medical School at UTHealth Houston. “I’m sorry –  I get a little emotional. It’s hard to die and come back and not have some emotions bubble up to the surface once in a while.”

Bradshaw suffered an out-of-hospital cardiac arrest (OHCA), the sudden cessation of her heart stemming from electrical failure. A major public health problem in the United States, OHCAs number 350,000 per year and result in death in all but 10 percent of cases. Successful resuscitation hinges on prompt CPR, early defibrillation, rapid patient transport, and standardized post-arrest care in hospital.

Bradshaw, 41, a resident of Houston, was on a video call in her home office May 11 with a co-worker at Shell Company in Australia, 8,500 miles away, when she suddenly collapsed off camera.

“All of a sudden, midway through the conversation, Dalyce was no longer responsive,” the colleague, Alison, said. “I could only see her shoulder. It became immediately obvious she was struggling to breathe. I shouted her name, but there was no response.”

Alison knew that Bradshaw’s husband, Daniel, also worked for Shell. She looked him up in the company directory and quickly sent him a note. Daniel, who told the emergency medicine group he had just come in from outside because he had forgotten his coffee, heard the phone on his computer ring. He unlocked the screen and saw the message come through: his wife had collapsed. He immediately called 9-1-1. Less than a minute had passed since event onset.

Daniel found Dalyce gasping for air, a frequent OHCA indicator resulting from a lack of oxygen in the brain. He had emergency medical training previously, but “a wonderful 9-1-1 operator just ran me through the timing (of chest compressions) – 1, 2, 3, 4,” he counted. First responders arrived quickly, he said, but his wife had no pulse and “at that point, I realized maybe she had passed away.”

Bradshaw’s heart was in ventricular fibrillation (VF), a disorganized rhythm that does not generate blood flow. The Houston Fire Department Paramedics performed high-quality CPR and shocked her heart. VF persisted, but after additional CPR, epinephrine administration, and another shock, she regained circulation and was transported to Memorial Hermann – Texas Medical Center. She was cooled to attenuate potential neurologic injury. She awoke five days later and has made a full recovery. 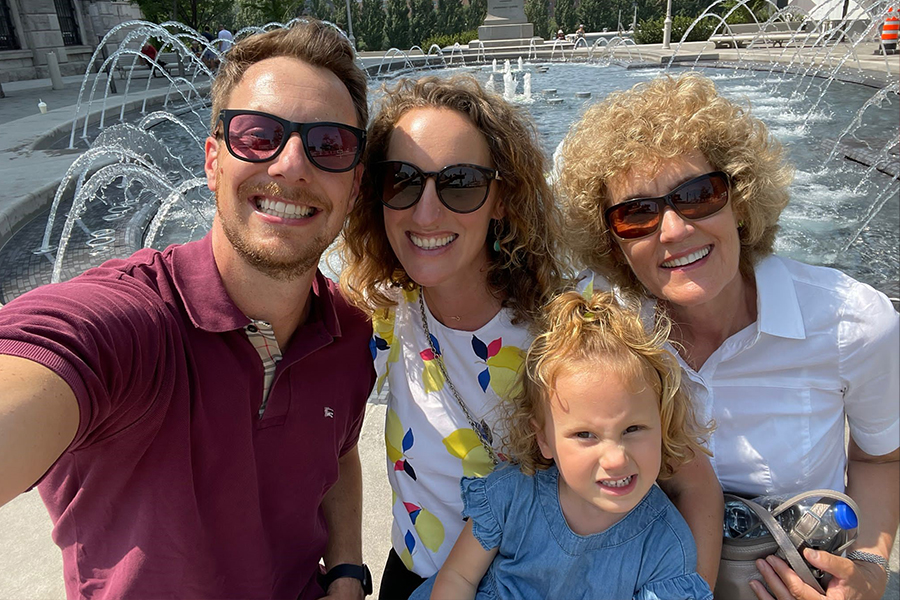 Bradshaw’s story is a testament to the effectiveness of programs such as UTHealth’s Texas-CARES Program designed to strengthen the chain of survival to help save lives. Texas-CARES uses the Cardiac Arrest Registry to Enhance Survival (CARES) to measure and report important cardiac arrest epidemiology, treatment parameters, and outcomes. The program works with communities and health care providers to implement evidence-based practices such as those found in the CPR LifeLinks national initiative.

“This amazing, life-saving event illustrates the tremendous benefits and potential methodically implementing and measuring the effectiveness of emergency systems of care right here in Houston,” said Bobrow. “We are thrilled that Mrs. Dalyce Bradshaw, who’s heart completely stopped, is doing great and back to her vibrant life with her family. This is why we are in this field.”

Dalyce and Daniel’s 4-year-old daughter, Pierina, has been “a bit cautious” around Bradshaw.

“She calls it ‘still my boo-boo’ and she touches my ICD (Implantable Cardioverter Defibrillator),” Bradshaw said. “I want her to know it’s in there. It’s mommy’s parachute. I’m so lucky to have it. It’s nothing to be afraid of. It’s now a part of me.”