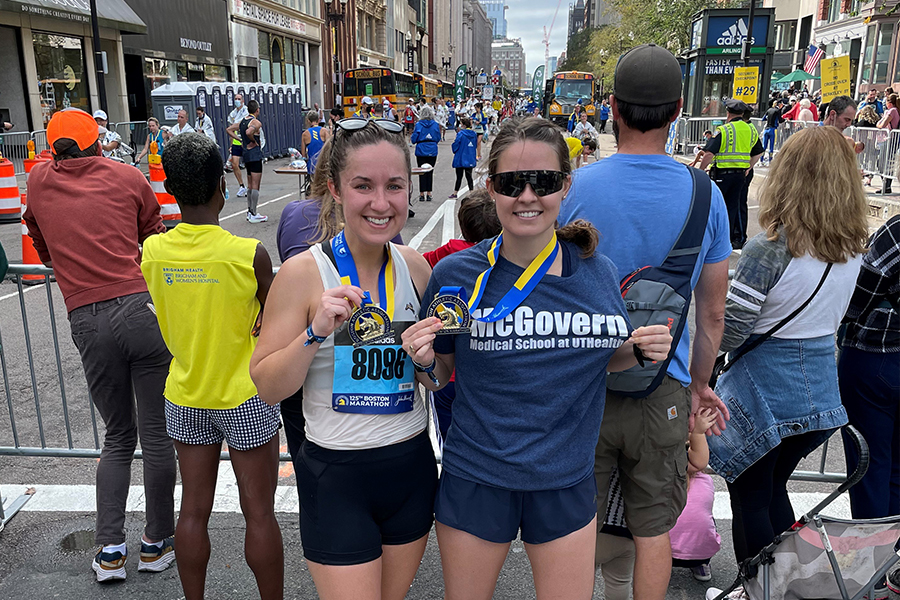 Hannah Coco, MS2 (right), and her sister Olivia (left), show off their medals after finishing the Boston Marathon, Oct. 11. 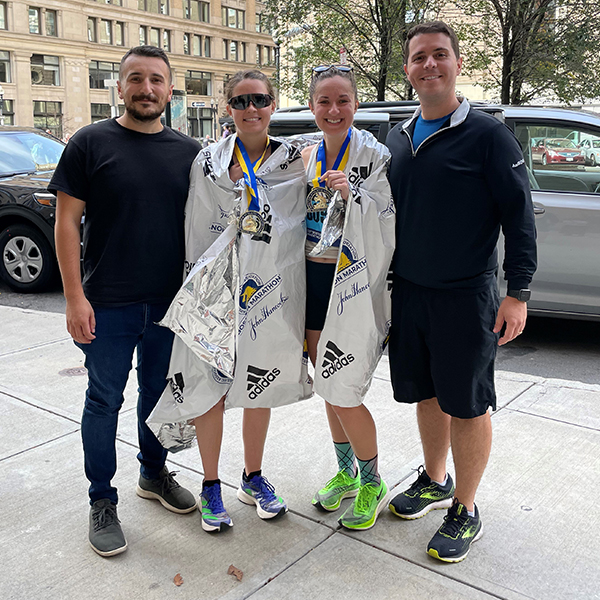 Second-year McGovern Medical School student Hannah Coco was able to realize that dream on Oct. 11, but not before an unusual route to the finish line.

“Getting to run the Boston Marathon was extremely special,” Coco said. “After being delayed and canceled three times because of COVID-19, this felt like the ultimate return to racing. Since runners must qualify for Boston at a prior marathon, this race feels like a huge reward after two training cycles of hard work.”

The Boston Marathon is usually held on Patriots Day in April, but due to the ongoing pandemic, was delayed until October. Because it’s held on a holiday, and the majority of the city does not have to work, the competition has a festive atmosphere, one that Coco’s family is very familiar with.

“My parents grew up in Wellesley [Massachusetts], the halfway point of the marathon, and my dad ran it for many years,” Coco said. “My oldest sister, Olivia, was running, too, so this was really a family affair. We knew exactly where our family would be on the course, and my dad handed us a water bottle while my mom filmed. It was a huge lift to see everyone cheering for us and to know the next time we saw them would be the finish line.”

Coco finished the Boston Marathon in 3:16:36 and ran a pace of 7:25 minutes/per mile. Her third full marathon (Philadelphia Marathon, 2018; Zydeco Marathon, 2020), the time on the challenging course in Boston was just five minutes off of her personal record.

“Overall, I was happy with my time,” Coco said. “Boston is a notoriously difficult course, and I felt like I ran the best I could have on the day my body gave me. After 18 months without a race, it was an exciting way to get back to it.”

It was Coco’s sister, Olivia, who originally inspired her love of running during a spring break trip her freshman year of college. Olivia had already begun running and training, so Hannah would join her on her runs after work in order to spend the most time with her sister.

“I got horrible shin splints and couldn’t keep up with her, but I was hooked,” Coco said. “Then my middle sister, Sophie, asked if I would run a half marathon with her. I was nervous but knew I wanted to run with her, so I reluctantly signed up. The training cycle was tons of fun as I saw my running improve. Since that race, I’ve been consistently training for half and full marathons.”

Coco sets aside time each day for a run, even if she feels her schedule is packed. She wakes up early, and begins her runs around 5:45 a.m. so that she can’t make excuses for not completing the run later in the day.

“Ultimately, I think it makes me more efficient studying and allows me to really enjoy school, because I still get to do other things that I love,” Coco said.

Distance running for Coco is a way to keep a level head while navigating the challenges of medical school. At a time in life where a bad test score makes it easy to be hard on herself, she turns to running to remind her that test scores aren’t the sole measure of success.

“With running, even a bad day is a good day,” Coco said. “A marathon is all about consistency and making your body work whether it feels good or not. My worst workouts, where I suffered the most, prepared me for what I would feel after mile 20 of the marathon. Marathon training teaches you to be resilient, even when every part of you wants to give in. I think those are skills that can be used in all aspects of life.”

Coco plans on running two more marathons before heading into her third year at McGovern, where a rigorous training schedule will be hard to follow during her clinicals. She will compete in the Houston Half Marathon in January before running the Woodlands Marathon in March, where she hopes to run under 3:05:00.

“I always want running to be a part of my life,” Coco said. “Before starting medical school, I was worried about how I would balance training and studying. However, I reminded myself that life will always feel busy. After medical school will come residency, and that will add a new set of challenges. I don’t want to put my running goals on the sideline for seven years or more. If I did that, I would likely forget why I love running altogether.”