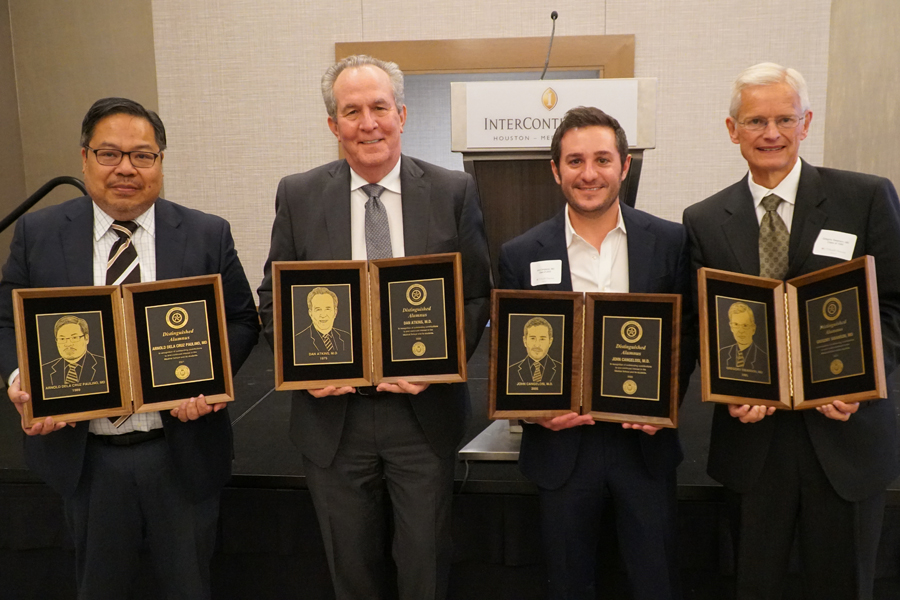 The Distinguished Alumnus Award honors alumni of McGovern Medical School who have made significant contributions in the areas of medical science and education or the prevention and treatment of disease, as well as those who demonstrate a continued interest in the Medical School and its students. The Distinguished Alumnus Award has been presented by the Alumni Association since 1987.

Cangelosi is the founder of Sagis, a physician-led, subspecialty pathology laboratory specializing in dermatopathology. He is the immediate past president of the Houston Society of Clinical Pathologists, a member of the board for A Children’s House for the Soul, and an ambassador to Texas Children’s Hospital.

“This is a huge honor for me,” Cangelosi said. “I remember vividly passing the wall of plaques commemorating past recipients while in medical school and wondering what each awardee had accomplished to win the award. It is surreal to know that I will have a plaque placed among such accomplished alumni.”

Cangelosi recalled taking an immense amount of pride in being a student and graduate of McGovern Medical School from the day he received his acceptance letter. “The training I received in the Texas Medical Center was second to none, and the network of amazing faculty and colleagues continue to enrich me both personally and professionally.”

He currently holds assistant clinical professor positions at the University of Texas Medical Branch in Galveston and the University of North Texas/TCOM in Fort Worth. He also teaches dermatopathology to both pathology and dermatology residents at various programs across the state.

Cangelosi recently established an endowment for the first-ever student lounge at McGovern Medical School. The donation and space, named “Losi’s Lounge,” will bolster McGovern students’ strong connection to the Medical School by providing a dedicated recreation space on campus to unwind and relax.

Cangelosi thanks Margaret McNeese, MD, for encouraging him to take a year off after his first year of medical school to chase a dream. “That year allowed me to come back more enthusiastic about medicine than I ever could have hoped,” he said. “It also gave me the self-confidence I needed to pursue my dreams. Without her support, I probably would not be a doctor today.”

Dan Atkins, MD, ’75
Atkins was accepted as a member of the third class of McGovern Medical School, then named the University of Texas Medical School at Houston. He is currently the co-director of the Gastrointestinal Eosinophilic Diseases Program at Children’s Hospital Colorado and an associate professor of pediatrics-allergy/immunology at the University of Colorado School of Medicine.

“This recognition reminds me of all the incredible teachers who taught me not just the science, but the practice of medicine,” he said. “Since I wasn’t sure I would even make it through medical school, this recognition from the institution where it all started means a great deal to me.”

For Atkins, McGovern Medical School introduced him to medicine and surrounded him with an incredible group of thoughtful, dedicated teachers. He said that the medical school gave him the knowledge, confidence, and framework needed to pursue further training.

“Totally immerse yourself in the experience, take advantage of the learning opportunities and enjoy the ride,” Atkins said in giving advice to current medical students. “Don’t underestimate what you can do with the opportunities you will be given.”

After graduating from the Medical School, Atkins completed his pediatric residency, followed by an ambulatory pediatrics fellowship at Hermann Hospital. He also completed a fellowship in allergy and clinical immunology at Buffalo General Hospital and Children’s Hospital of Buffalo, and a medical staff fellowship in the Laboratory of Clinical Investigation, part of the National Institute of Allergy and Infectious Diseases, in Bethesda, Md. He spent most of his career as the Director of Ambulatory Pediatrics at National Jewish Health until leaving in 2014 to start a new Allergy and Immunology Section in the Department of Pediatrics at Children’s Hospital Colorado in Denver.

Throughout his career, Atkins has won other prestigious awards, including the 2001 Clinician of the Year and the 2004-05 Outstanding Teacher of the Year, from National Jewish Health, and the 2019 Career Teaching Scholar Award from the Department of Pediatrics at the University of Colorado School of Medicine. He has been consistently named among the “Best Doctors in America” and “Denver’s Top Doctors.”

“I’d like to thank Drs. Rodney Howell, Larry Pickering, and Margaret McNeese, for inspiring me to become a pediatrician, a decision that has led to daily rewards,” Atkins said.

Arnold dela Cruz Paulino, MD, ’89
Paulino is a professor and director of Pediatric Radiation Oncology in the Department of Radiation Oncology at The University of Texas MD Anderson Cancer Center. Following his graduation from the Medical School in 1989, he completed his residency at Loyola University of Chicago in 1994 and a fellowship at the St. Jude Children’s Research Hospital in Memphis, Tenn.

Originally from the Philippines, Paulino called the award a testimony to his parents’ hard work and the notion that the American dream is still possible.

“To be named as a Distinguished Alumnus of McGovern Medical School is definitely a tremendous honor for me and my family,” Paulino said. “I came from the Philippines and just became an American citizen when I entered medical school at the age of 19 years. My parents worked very hard in this country with double jobs, and what some may call menial jobs supporting me and my siblings. Although I was far from being the best student in our medical school class, I was perseverant in the face of many obstacles.”

Paulino said that the Distinguished Alumnus award is special, because the Medical School is where his career started.

“To be honest, when Roger Khetan, MD ’94, McGovern Medical School Alumni Association president, called me and informed me I was a 2021 Distinguished Alumnus, I wanted to call the alumni office to report the ‘prank,’” he said. “I did not believe it fully until I received the letter. To be honored by my own medical school to me may be the best accolade that I have received. I am humbled to the nth degree that my medical school is proud of me and my accomplishments.”

“McGovern Medical School instilled in me the core values of hard work and resilience,” Paulino said. “As a first-year student, I remember that I was barely passing my physiology class, and Sondra Ives, from the Office of Student Affairs, helped me find a tutor. The staff really cares about each student being successful. I owe whatever accomplishments I have to the Medical School for laying the foundation for my future.”

Paulino thanked his family and teachers in college, McGovern, and postgraduate training for playing an important part in his career.

“The ones who are not always recognized are all the brave children with cancer that I have encountered every day at work,” Paulino said. “The many lessons I have learned from these children are priceless. Although some of them are not around anymore, their lessons will continue to live on through my medical students, residents, and faculty.”

Greg Swanson, MD, ’85
Swanson is a radiation oncologist for Baylor Scott & White Clinic in Temple, Texas. A 1985 graduate of McGovern Medical School, Swanson completed his residency in radiation oncology at the Mayo Clinic in 1989.

Swanson said that winning the Distinguished Alumnus Award is an honor, and remarked that even though he was fortunate for somebody to take notice of his career and recognize him for it, he spent two years with 200 capable students who also went on to become dedicated physicians.

“While I had the opportunity to do some things that got me noticed, I hope I can be seen as representative of my equally remarkable classmates that dedicated themselves to their patients,” Swanson said. “With everything, I have always tried to put patients first and hope that I truly have. By being named a distinguished alumnus, I aspire to be a truly worthy representative.”

Swanson noted that sometimes awards for “top doctor” or “best doctor” are not as evaluative as they may seem and can sometimes seem as though they exist to sell magazines or expensive plaques. However, he said he felt the Distinguished Alumnus Award at McGovern was different.

“What’s refreshing about the Distinguished Alumnus designation is that there is absolutely no pretext here,” he said. “My colleagues looked at my career and said ‘Good job.’ Thank you for seeing me; what an honor.”

Reflecting on Medical School, Swanson recalled being prepared for the worst after one of his best friends informed him of how cut-throat his medical experience was at a different school, where students were always trying to out-do each other. Swanson found the experience at McGovern completely different, having the pleasure of getting to know all of his classmates and learning in an environment that is selfless instead of selfish.

“When I was a first-year resident, I discovered a mass deep in the abdomen of a patient (that was actually quite subtle),” Swanson shared. “When I had my attending examine the patient, he turned to me and said, ‘Where did you go to medical school?’ It was a proud moment. I have always appreciated the basic cores that were instilled in me.”

Swanson said that he is grateful every day for his wife that supported him and his long hours and frequent absences. The couple married in college and made the decision not to delay their family.

“She gave up her teaching career to stay home and be a full-time mom, and I hope our four children realized how blessed they are for that. I can’t say enough,” he said.

Swanson said he also is grateful for the “soul-searching” experience he had in one of his interviews with a professor before arriving on campus, to God and his faith, and to McGovern Medical School.

“I am so appreciative to have been given the chance,” he said.

View a photo recap of the entire 2022 Alumni Weekend.