By Roman Petrowski, Office of Communications
May 6, 2022 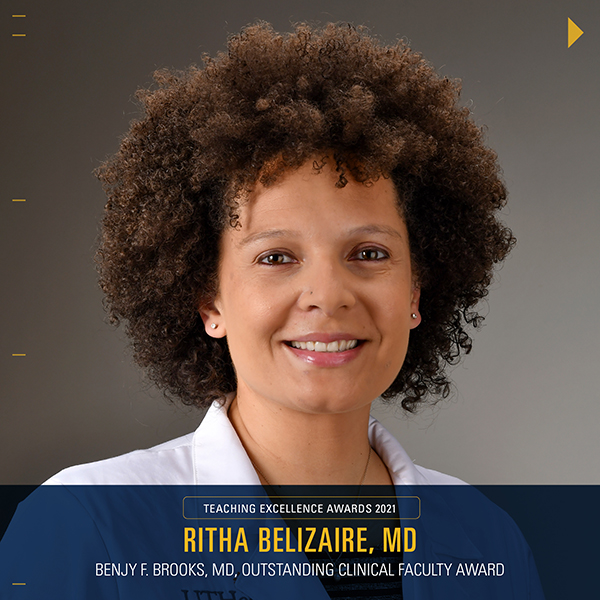 Ritha Belizaire, MD, assistant professor in the Department of Surgery, is the 2022 winner of the Benjy F. Brooks, MD, Outstanding Clinical Faculty Award.

“I have never won an award like this, so after the initial shock wore off, I felt incredibly honored and proud,” Belizaire described after winning the award. “I sent the email to my mom (as one does). It’s easy to forget that it is a privilege to teach the next generation of doctors and understand that you can have an impact on the trajectory of someone’s career as a physician. I feel absolutely humbled that they chose me for this award.”

Established in 1991 by the Alumni Association, the Benjy Brooks Award is presented by the McGovern’s Student Surgical Association to recognize individuals who, “Complement and enhance the education program by serving as role models for students.” It is named in honor of Dr. Benjy Brooks, the first board-certified woman pediatric surgeon in the United States, who joined McGovern Medical School’s faculty in 1973 and remained active in the life of the Medical School until her death in 1998.

Medical students may nominate faculty or residents for the award.

Belizaire said the award is a reminder that people can change and have a positive influence on students even if it has not always been that way.

“As a resident, I was not the greatest teacher or mentor to students,” she said. “As an attending, you have the opportunity to slow down and spend more time with learners without all of the added responsibilities and time constraints of residency. Receiving this award means that we are all capable of professional and personal growth, and I hope to continue growing and having a positive impact on students and trainees.”

Belizaire received her bachelor of science in biomedical engineering from Yale University in 2002 and completed her doctor of medicine at the University of Texas Health Science Center at San Antonio in 2008. She completed a general surgery residency in 2015 at the University of Cincinnati before completing a colon and rectal surgery fellowship at Mt. Sinai Roosevelt/St. Luke’s in New York City in 2017.

Belizaire says that while she doesn’t have a specific philosophy for reaching, she generally makes a point of asking students their names, where they’re from, and what type of specialty may interest them. She tries to teach one or two specific points during each operation to make sure they feel seen and learn something in the process, much like her favorite attendings did for her in medical school.

“My favorite part about teaching is when you witness a student or resident grasp a topic or see something they’ve never seen before or get excited about something you’ve taught them,” Belizaire said. “I would be lying if I said I didn’t love hearing about students choosing to apply to surgery because of their time at LBJ or a realization they had during a case we did together. That’s really special.”

Belizaire said that she had many influences to help make her career decision, including her mother, who was an ICU nurse, and her father, a retired vascular and general surgeon and the first Black surgeon in Midland, Texas, in the 1980s.

Belizaire also drew influence from Dr. Timothy Pritts, Dr. Warren Dorlac, and Dr. Syed Ahmad from her residency at the University of Cincinnati, and is thankful for the support of Lillian Kao, MD, professor  in the Department of Surgery, for her incredible support of her and her career since she joined the faculty in 2019.

“I would like to thank the McGovern Medical school students for this honor,” Belizaire said. “Again, I am truly humbled. I would also like to thank the UTHealth surgical faculty who demonstrate a commitment to teaching and inspire me to be a better teacher to our students and trainees.”