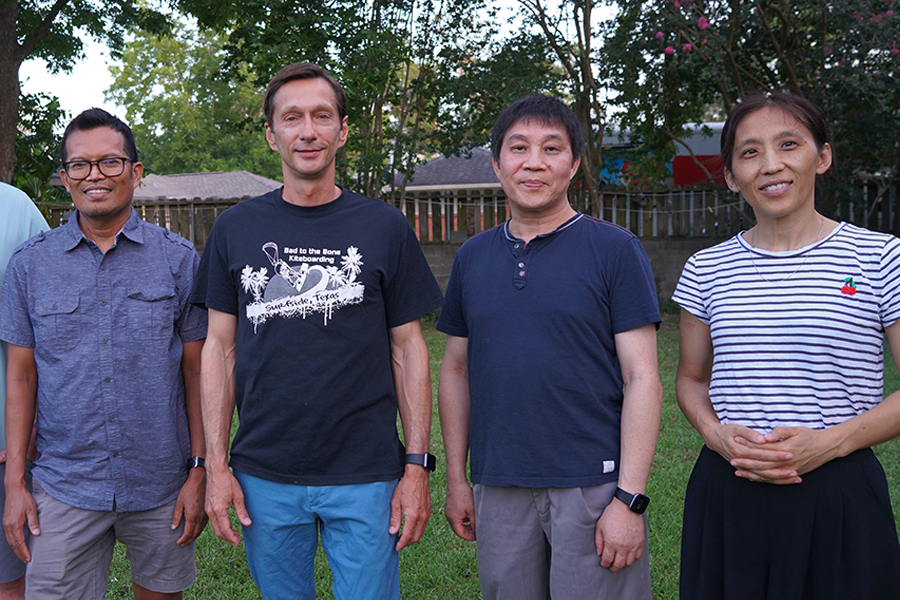 A study by the lab of Mikhail Kolonin, PhD, discovers a new molecular mechanism controlling metabolism.

A study by the lab of Mikhail Kolonin, PhD, professor and director of the Center for Metabolic and Degenerative Diseases in the Brown Foundation Institute of Molecular Medicine, has discovered a new molecular mechanism controlling metabolism.

Their research focuses on the formation of brown adipocytes, the mitochondria-rich cells in brown fat tissue that helps to expend energy through non-shivering thermogenesis and, thereby, protects from obesity and the associated type 2 diabetes.

Research has shown that activation of brown adipocyte function is stimulated by the formation of new blood vessels and activation of sympathetic nerves running along. However, it remains unclear how innervation and neovascularization is coordinated during that process and whether it could be harnessed for therapeutic purposes.

“We have hypothesized that molecules targeting fat tissue vasculature could be used to modulate adipocyte activity,” Kolonin said.

Kolonin and his colleagues previously screened a combinatorial library to identify a peptide that homes to endothelial cells lining the vasculature in brown adipose tissue when administered systemically. In their new report, they showed that this peptide mimics the neural growth factor (NGF) known to bind the nerve growth factor receptor, also known as tropomyosin receptor kinase A (TrkA).

The colleagues’ research demonstrates that the peptide binds to an isoform of TrkA, a cell surface receptor expressed selectively in the vasculature. By using genetic models, the authors knocked out TrkA in the endothelium of mice and observed that, as a result, the animals developed fat tissue deficient in thermogenesis and energy expenditure.

“Our results demonstrate that the endothelial TrkA isoform coordinates the alignment of neurons and blood vessels cooperating in brown adipocyte formation,” Kolonin said.

In their work, Kolonin and colleagues also modified the TrkA-binding peptide to design a compound, termed D-BAT, that ablates the targeted cells. Treatment of pre-clinical models with D-BAT resulted in thermogenesis impairment and predisposed them to obesity and glucose intolerance.

“These results demonstrate that D-BAT causes brown adipose tissue reorganization and suppresses its function,” Kolonin commented.“ Importantly, in a model of cancer, D-BAT inhibited the remodeling of tumor-adjacent fat tissue that the group had previously shown to promote cancer progression.”

The researchers conclude that TrkA signaling in the endothelium, which supports neuro-vascular coordination and promotes adipocyte browning, can be therapeutically targeted. This work is a step toward developing new approaches to control adipose tissue function in patients with metabolic disease and cancer.

The article, “Endothelial TrkA coordinates vascularization and innervation in thermogenic adipose tissue and can be targeted to control metabolism,” is co-authored by Alexes Daquinag, PhD, Zhanguo Gao, and Yongmei Yu. The paper, published in Molecular Metabolism, was supported by the Levy-Longenbaugh Fund.

Kolonin is the Harry E. Bovay, Jr. Distinguished University Chair in Metabolic Disease Research at McGovern Medical School. He is also on the faculty of The University of Texas MD Anderson Cancer Center UTHealth Houston Graduate School of Biomedical Sciences.