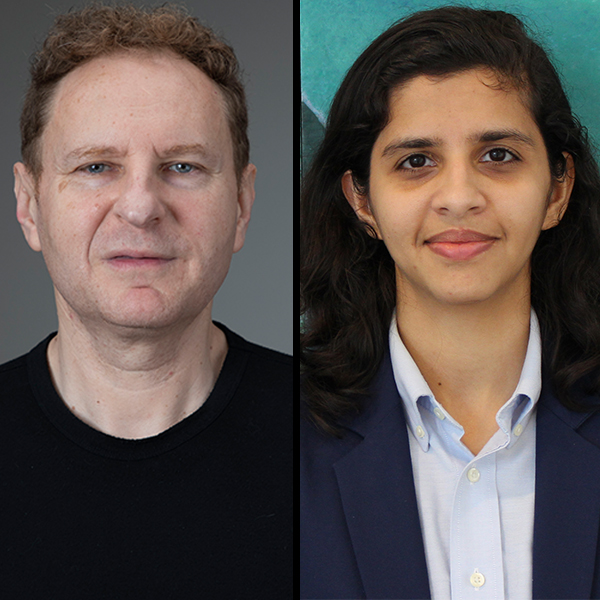 Research from Valentin Dragoi, PhD; and Natasha Kharas, MD, PhD, may lead to a better understanding of neural communications.

Recent research from the lab of Valentin Dragoi, PhD, Rochelle and Max Levit Distinguished Professor in the Neurosciences, reporting a novel discovery on how neurons emit signals across cortical circuits, has been published in the Proceedings of the National Academy of Sciences.

Research for the paper is funded by a $1.8 million R01 grant from the National Institutes of Health received in 2022. The grant also funds Dragoi’s studies on sleep and its role in modulating information processing and cognitive function in animals.

Researchers injected a viral construct into the visual cortex to render neurons sensitive to blue light and hence increase their responses when an optical fiber emitted light. They subsequently monitored neural activity while animals performed a task or were sleeping for 20-30 minutes.

The study found that when animals are awake, but passive, or even when they performed a task, optogenetically-evoked electrical signals were strong, but remained local to the stimulated neural population. However, when animals were asleep, electrical signals spread out widely across the cortical circuit that they monitored. Because of this, Dragoi’s group discovered that during sleep, the coupling between neurons is strong, while they are only weakly coupled during the awake state.

Additionally, the research showed that signals are propagated more efficiently during passive wakefulness compared to periods of high arousal.

“Our work is important because it provides insight into the optimal brain state in which neurons communicate most effectively to propagate information across local circuits,” Dragoi said. “Surprisingly, this state is not the awake state when one would expect that signal flow would be most robust. Instead, neural communication is most efficient during sleep, but the exact role of this elevated neural trafficking is unknown.”

Moving forward, the lab will study how neural plasticity changes during wakefulness as well as during sleep. Neural plasticity represents the ability of single cells and populations to adapt to changes in the environment, and is widely believed to underlie the learning of new skills.

“Importantly, we will examine whether our findings can be used to improve therapeutics in humans with cortical dysfunction after neural injury or stroke,” Dragoi said.