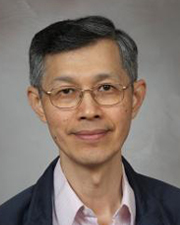 My lab has a long-standing interest in understanding the principles and regulatory mechanisms that govern the cytoplasmic fate of messenger RNA (mRNA) in mammalian cells. These post-transcriptional processes (including mRNA turnover, translation, and localization) play an essential role in modulation and quality control of gene expression, and when they go awry, they can contribute to the pathogenesis of human disease such as cancer and airway inflammation. We have been using molecular, biochemical, cellular, and computational biology approaches, including next-generation sequencing-based methodologies combined with in-depth bioinformatics analysis to study the regulation of these critical processes in mammalian cells. We are applying/developing transcriptome-based metabolic pulse-chase labeling and RNA-IP approaches that allow better characterization of changes in global mRNA turnover caused by specific cellular events. Currently, we focus on investigating 1) how rates of mRNA decay may be coordinated for groups of mRNAs during cell growth and differentiation, and2) the mechanisms by which global mRNA turnover shapes or reprograms the overall mRNA expression profile or transcriptome in mammalian cells responding to intra- or extra-cellular stimuli.

Deadenylation (i.e., shortening of them RNA 3′ poly(A) tail) begins when mRNAs arrive in the cytoplasm and is a rate-limiting step for mRNA decay and translational silencing. Thus, deadenylation greatly affects the cytoplasmic fate of mRNA sand is a critical point for controlling mRNA functions. We currently focus on studying key mRNA deadenylation factors that contain poly(A)-binding protein (PABP)-interactingPAM2 motif. Reversible phosphorylation within the intrinsically disordered region (IDR) where the PAM2 motif resides modulates the interactions between these proteins and PABP, leading to changes in mRNA fate. This line of research offers a new framework for elucidating dynamic signal dependent regulation of mRNA stability across the transcriptome in mammalian cells.

More than two-thirds of mammalian mRNA genes express isoforms with distinct 3′ untranslated regions (UTRs) due to alternative 3’end processing and polyadenylation (APA)of pre-mRNA. mRNA 3’UTRs harbor many regulatory elements and also bind various RNA-binding proteins, each of which can affect a transcript’s cytoplasmic fate. The UTR-APA process introduces a dichotomy between use of distal and proximal polyadenylation sites, allowing production of mRNA isoforms either containing or lacking the full array of cis-regulatory elements in the 3′ UTR. As the 3’UTRelements can be activating or repressive, shortening of 3’UTRs via APA may help a particular mRNA escape positive or negative regulation. Currently, we are employing next-generation sequencing-based approaches, such as BrUchase-seq and ribosome-profiling, to investigate how APA-elicited global shortening of mRNA3’UTR reprograms the mammalian transcriptome and how the changes in mRNA fate may be linked to tumorigenesis.

N6-methyladenosine (m6A) is the most abundant eukaryotic modification of mRNAs and long noncoding RNAs. Recent discoveries of the locations, functions and mechanisms of m6A have shed light on a new layer of gene regulation at the RNA level, giving rise to the field of m6A epitranscriptomics. A major limitation of m6A studies so far is the use of poorly characterized mixtures of m6A modified and un-methylated transcripts. As a result, the impact of m6Amodification on mRNA turnover across the transcriptome remains very much an open issue. In this line of research, we use a novel RNA-immunoprecipitation based approach developed in our lab to measure decay rates for un-methylated and methylated pools of newly synthesized transcripts in parallel. The results will give important new insights into the mechanisms by which m6A regulates global RNA turnover. Moreover, they will also lay the foundation for investigating how m6Aacross the transcriptome may be altered during tumorigenesis and inflammation.