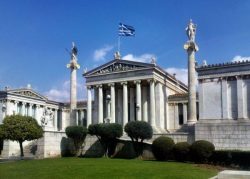 Dr. Safi to be Inducted into the Academy of Athens

University of Texas Health Science Center at Houston (UTHealth), Department of Cardiothoracic and Vascular Surgery Chairman and Chief, Dr. Hazim Safi has been nominated and selected to be inducted into the Academy of Athens as a Corresponding Member.  His induction ceremony is November 7th, 2017 in Athens, Greece.  The ceremony will be conducted by Lukas Papadimos, former prime minister of Greece.  The Academy of Athens, founded in 1926 operates with the framework of cultivating education and research in the fields of Scientific Research, Literature, and The Fine Arts.  The Academy is a reflection in name and an extension of the Academy of Plato, founded in 387 BC.  Dr. Safi will be one of only two American Cardiothoracic and Vascular Surgeons to be inducted into the society.

Dr. Safi has authored or co-authored 30 book chapters and over 200 scientific articles in medical journals. His studies have helped improve surgical techniques that greatly improve outcomes. He lectures and gives workshops internationally to provide training for surgeons.