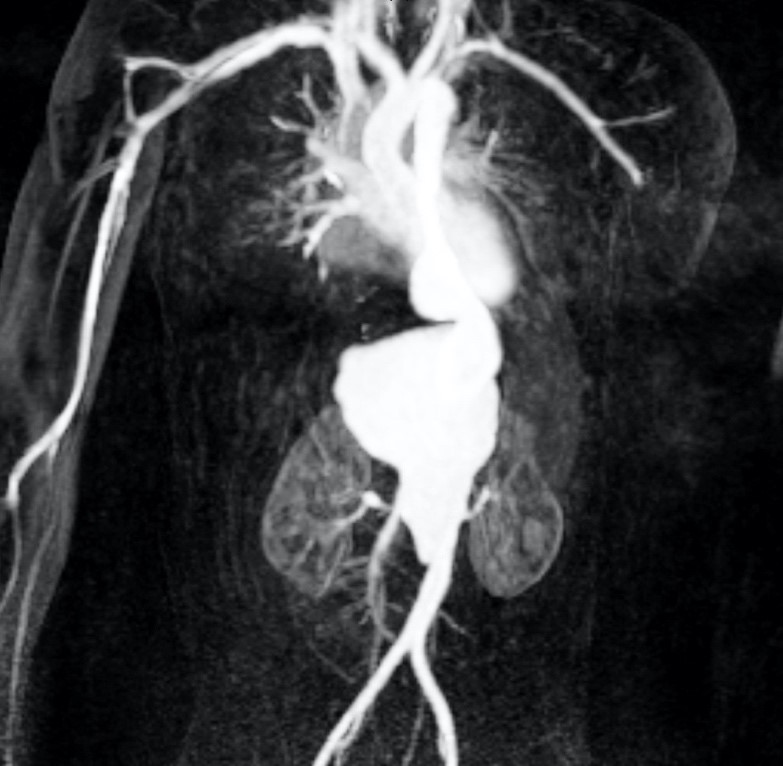 The patient is a four-year-old male with a history of tuberous sclerosis, diagnosed at 5 months of age. Physical examination demonstrated café-au-lait spots and subcutaneous tubers of the chest, abdomen and lower back. Magnetic resonance angiography showed a thoracoabdominal aneurysm extending from T8-L3 (Fig. 1), measuring 7.0 cm in its maximum diameter at the abdominal aorta with three areas of fusiform dilatation extending from the distal descending thoracic aorta superior to the renal arteries. Surgical therapy was undertaken to prevent rupture.

A left thoracoabdominal incision was performed and the chest was entered at the 6th intercostal space. The aorta was cross-clamped at the level of T5 and was transected. A 16mm woven Dacron tube graft was sutured end-to-end to the descending thoracic aorta, which measured 14mm, using “clamp-and-sew” technique. Intercostal arteries 8 and 9 were reattached by incorporation into the proximal anastomosis and intercostal artery 10 was ligated. The abdominal aorta was opened and a side hole was cut into the Dacron graft for reattachment of the celiac, superior mesenteric and bilateral renal arteries as a visceral patch. Histopathological examination of the resected aorta showed cystic medial necrosis with reactive adventitial vascular proliferation extending into the media and marked loss of elastic tissue and medial smooth muscle. His postoperative course was uneventful and he was discharged on postoperative day 5. 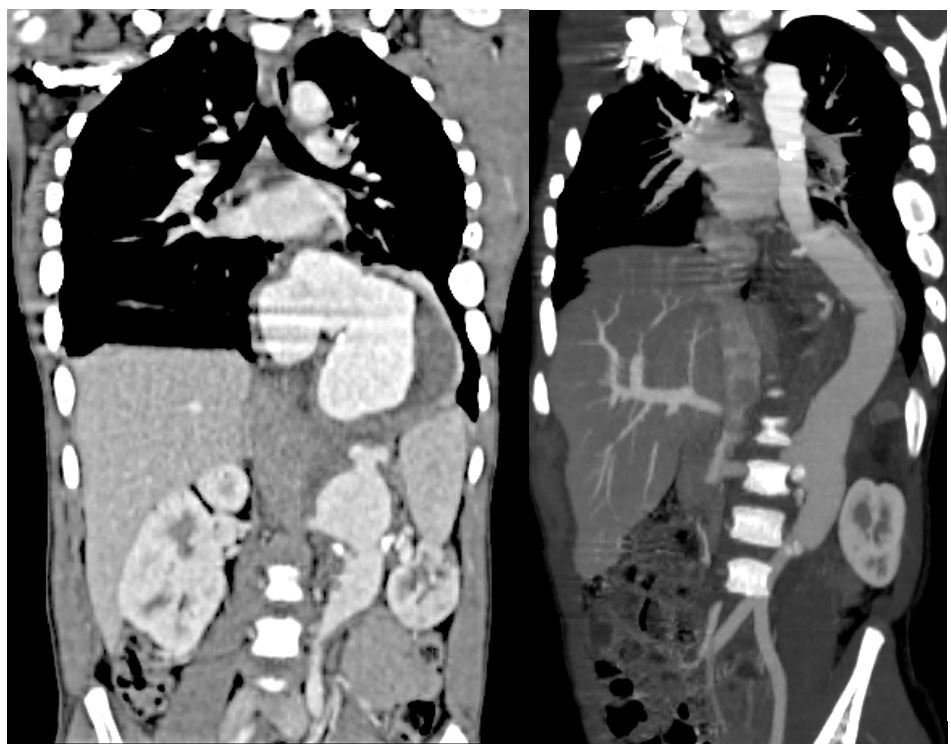 Abdominal aortic aneurysms in childhood are extremely rare and the majority of reported cases are associated with inherited disorders of connective tissues such as Marfan’s or Ehlers-Danlos syndromes (4). Tuberous sclerosis complex (TSC) is an autosomal-dominant genetic disease due to genetic mutations of the TSC1 and TSC2 genes, in which facial angiofibromas and hamartomas in multiple organ systems are common findings (5). Vascular aneurysms are an uncommon complication of TSC and can affect vessels of any size including the abdominal aorta and albeit more rarely, the thoracic aorta (6). Although significant vascular lesions are rare, when present they can be life threatening, thus recognition of TSC and early diagnosis of vascular involvement are important to prevent morbidity and mortality (7). 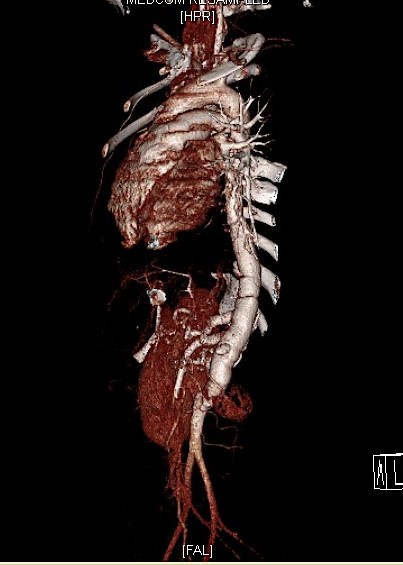 The pathogenesis of aneurysm formation in TS is not fully understood, however dysplasia and medial atrophy contribute to the loss of aortic wall strength and aneurysm formation (8). Our patient’s pathology was significant for loss of elastic tissue and was notable for increased loss of SMCs in the media at the time of the third operation. The occurrence of a new aneurysm, superior or inferior to the graft after aneurysm repair, might be explained by an innate weakness of the aortic wall associated with TS (1).

In the present case, strict follow-up surveillance led to the incidental finding of an otherwise asymptomatic aneurysm, which prompted urgent re-exploration and repair. Due to the close proximity of the visceral and renal vessels, we performed island reconstruction as they were difficult to separate and anastomose individually to the aorta. It has been recommended to use the largest diameter graft that can be safely implanted, especially in infants and younger children, as larger conduits will allow for more growth before patients outgrow the initial graft, necessitating a second operation (7,8). We intentionally chose a 16mm graft for a 14mm mid-descending thoracic aorta during the first operation and an 18mm graft for a 16mm aorta during the third operation. Recent follow-up imaging demonstrated patent graft without aneurysmal changes.