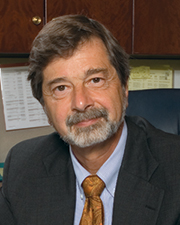 He also was a faculty member of the Graduate School of Biomedical Sciences at The University of Texas Health Science Center at Houston (UTHealth) and the director of the Multiple Sclerosis Research Group and the Magnetic Resonance Imaging Analysis Center. Wolinsky received his doctorate degree from The University of Illinois in 1969.

Residency training in clinical neurology, a fellowship in experimental neuropathology and faculty appointment at The University of California San Francisco followed. While in San Francisco, his research interests concentrated on the pathogenesis of viral infections of the nervous system, and his clinical efforts began to focus on experimental therapeutics of infections of the central nervous system and multiple sclerosis. He subsequently joined the faculty of The Johns Hopkins University’s School of Medicine and School of Hygiene and Public Health in 1978 before settling in Houston in 1983. In Baltimore, he applied more molecular tools to his basic investigations and became more interested in the primary and secondary immunopathogenesis of neural disease.

He was active in the design, implementation, conduct, and analysis of clinical trials of multiple sclerosis and conducts basic and applied research in quantitative magnetic resonance imaging and magnetic resonance spectroscopic imaging in demyelinating diseases.