Woman regains quality of life with help from gastroenterologist 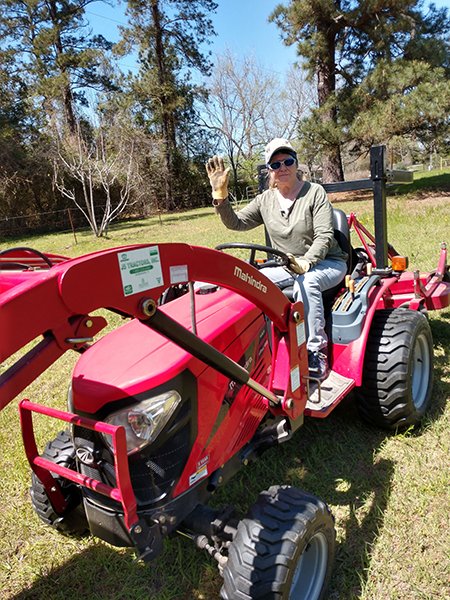 Giselle Doss, replacing barbed wire fencing on her farm. Doss, 67, used to spend her days indoors suffering from chronic diarrhea related to irritable bowel syndrome (IBS), a condition that confined her to her home. (Photo by Giselle Doss).

For the first time in two years, Giselle Doss took a family vacation.

Doss, 67, used to spend her days indoors suffering from chronic diarrhea related to irritable bowel syndrome (IBS), a condition that confined her to her home.

IBS is an intestinal disorder that is associated with abdominal pain, gas and bloating, and bowel habit changes including diarrhea and/or constipation.

“I have always been prone to sensitive bowel movements, but in 2019 it got to the point where I could not leave my house or do anything,” said Doss. “My physician at the time put me through a vast number of tests for almost a year and a half, but nothing helped me.”

After numerous failed treatments, Doss was referred to Brooks D. Cash, MD, director of the Division of Gastroenterology, Hepatology, and Nutrition at McGovern Medical School at The University of Texas Health Science Center at Houston (UTHealth).

“Ms. Doss was suffering from debilitating diarrhea that really impacted her quality of life,” said Cash, a gastroenterologist with UT Physicians. “After examining her case, I felt confident that our team could help her get back to living a normal life.”

Previously, Doss was diagnosed with microscopic colitis, a type of inflammation in the large intestine (colon) that causes persistent diarrhea. However, medications commonly used to treat microscopic colitis did not prove to be effective in her case.

“One of the treatments used for her condition is a steroid, but she did not respond to that, which is unusual,” he said. “In such a situation, it’s important to take a step back and consider other or additional possibilities for patients’ symptoms,” he added.

Doss underwent more tests under Cash’s care to rule out any additional health risks. Once she was cleared, he began treating Doss with different medications. Using a combination of a steroid and a medication used to slow down bowel movements, he was able to improve her bowel movements and urgency to a manageable and acceptable level.

“With this combination I went quickly from having 16 urgent movements a day to only needing to go three to five times a day. Over a longer period of time, things improved to the point where I have not had an urgent movement since December of last year,” Doss said. “I am very thankful to Dr. Cash and his nurse. I felt that they both really cared about the misery I was going through. Having chronic diarrhea affected not only me, but my entire family. I was unable to attend weddings and family reunions. I am from a pretty tight family, and those things are important to me. So after so long a time, my husband and I felt like we were finally getting our lives back. Taking that trip was very freeing.”

Cash urges anyone experiencing IBS symptoms to not be afraid or embarrassed to seek help.

“IBS is one of most common conditions we see as gastroenterologists and there is nothing to be ashamed about regarding its symptoms. It’s a confusing condition as it’s really more of a syndrome of symptoms as opposed to a single disease, so there are multiple potential causes of IBS symptoms and multiple different treatment approaches as well. While some may be tempted to dismiss IBS as a nuisance disorder, the advances we’ve had in the entire management of the condition has raised awareness of its impact on patients and their families. We have a lot of different methods we can use to treat this condition, and when we are able to relieve a patient’s IBS symptoms and see the accompanying improvement in their quality of life it is really empowering,” Cash said.