Researchers of CONTAIN study say convalescent plasma likely had benefit in early days of COVID-19; could be used early in next pandemic 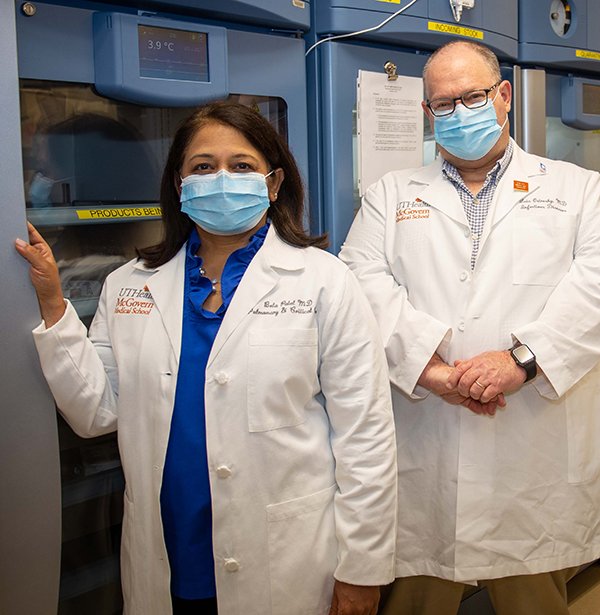 Bela Patel, MD, and Luis Ostrosky, MD, were coinvestigators for the CONTAIN COVID-19 clinical trial for convalescent plasma, which was just published in JAMA Internal Medicine. (Photo by UTHealth Houston)

COVID-19 convalescent plasma showed a likely benefit for patients early in the pandemic before remdesivir and corticosteroids were in use, according to results of a landmark study published today in JAMA Internal Medicine that included physician-scientists at The University of Texas Health Science Center at Houston (UTHealth Houston).

UTHealth Houston and The University of Texas Health Science Center at Tyler participated in the National Institutes of Health-funded randomized clinical trial as part of the Center for Clinical and Translational Sciences (CCTS). Called CONTAIN COVID-19, the clinical trial was established by New York University (NYU) and Montefiore Medical Center/Albert Einstein College of Medicine to evaluate the safety and efficacy of convalescent plasma in hospitalized coronavirus patients. UTHealth Houston carried out this study locally in partnership with Memorial Hermann and Harris Health’s Lyndon B. Johnson Hospital, enrolling underserved populations throughout Harris County.

The trial showed that convalescent plasma was safe and well tolerated. It worked best in the early days of the pandemic, when plasma had higher antibody levels, when it was given early in the disease, and particularly for immunosuppressed people.

“This landmark study shows once and for all that convalescent plasma is an important countermeasure early in a pandemic when no other therapies are available. It was an important finding that lays the foundation for the rapid response to future pandemics,” said Luis Ostrosky, MD, professor and director of the Division of Infectious Diseases at McGovern Medical School at UTHealth Houston. “This trial, the largest of its kind, also showed that with proper funding and structure, researchers across the country were able to come together quickly in the middle of a global crisis to explore this therapeutic intervention.”

Results of the trial also showed that after the introduction of remdesivir and corticosteroids, efficacy dropped and by the end of the 11-month trial, there was no difference in outcome between plasma and placebo in patients at 14 and 28 days. However, patients on corticosteroids, but not remdesivir, appeared to benefit from convalescent plasma at day 14.

Because the patient characteristics, available treatments, and the virus, changed over time, subgroup analyses were done, which revealed the possible benefit for patients in the first quarter of the trial, a period from April to June 2020.

“Convalescent plasma could be an important early treatment tool in places that don’t have access to monoclonal antibodies, corticosteroids, remdesivir, or other therapies,” said Bela Patel, MD, co-investigator, professor and director of the Division of Critical Care, and Graham Distinguished University Chair at McGovern Medical School. “It should also be considered for patients who are immunosuppressed and those whose B cell function is compromised.”

Researchers also reported that, in addition to the introduction of corticosteroids and remdesivir, the decrease in efficacy over time may have been due to using convalescent plasma that originated from New York City before other viral variants emerged.

“It is vitally important to do research such as this during a pivotal public health crisis to determine what works and what doesn’t and use that information for future pandemics. We are proud to be part of such a milestone clinical trial,” said David McPherson, MD, co-investigator for the trial, principal investigator of CCTS, chair of the Department of Internal Medicine at McGovern Medical School at UTHealth Houston, and James T. and Nancy B. Willerson Chair.

The trial was in funded in past with an $8 million grant (3UL1TR003167-02S1) from the National Center for Advancing Translational Sciences, part of the National Institutes of Health.