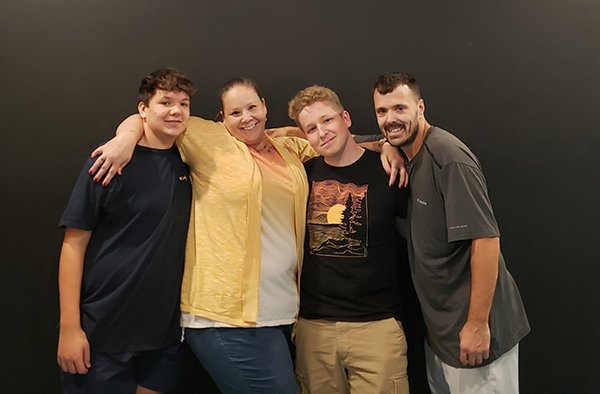 After surviving an aortic dissection, Amy Fireck sought help from experts with UTHealth Houston/Memorial Hermann. Through their expertise, they diagnosed Amy and her sons with a gene defect that causes aortic aneurysms. (Photo by Amy Fireck)

On the surface, 18-year-old Ayden Fireck was spending his senior year doing the things he loved: working at a local emergency room, practicing drills in the ROTC at his Georgia high school, and deciding where to go to college.

But under the skin, Ayden had a ticking time bomb of sorts — a weakening of his aorta caused by an inherited gene defect — which, if it dissected or ruptured, could threaten his life.

Through their expertise, Ayden was diagnosed with Loeys-Dietz syndrome — a genetic condition that can lead to a weakening of the wall of the aorta, resulting in a bulge called an aneurysm, or a tearing in the inner lining called a dissection.

“When I was first diagnosed with the gene defect, I was in disbelief,” said Ayden, who was 12 years old at the time. “Up until my diagnosis I considered myself to be a normal kid. It took me a couple of months to get used to it and accept it, but I eventually accepted it as who I am and I have always tried my best to live life without it hindering me.”

Ayden’s diagnosis, however, didn’t come as a big surprise to his family. His mom, Amy Fireck, suffers from the same condition, as did her father. The family suspects his mother — Amy’s grandmother — and a great-uncle who died at age 21 also had it. 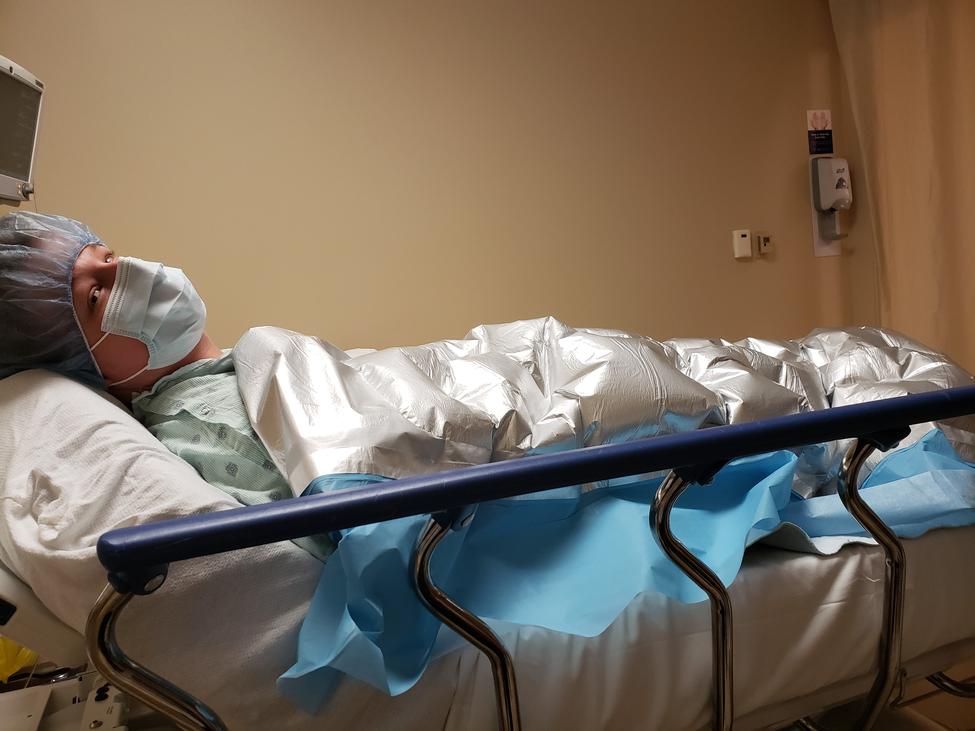 Physicians put a plan in place to regularly monitor Ayden’s aorta and when his aneurysm reached a size deemed dangerous, he underwent the surgery to prevent a deadly dissection in him. (Photo by Amy Fireck)

“When I was 34, I suffered an aortic dissection. The doctors in the emergency room in Georgia couldn’t believe they caught it in time before it ruptured,” said Amy. “Immediately following my recovery, I did my research and found UTHealth Houston through the John Ritter Foundation.”

In Houston, Amy met with Dianna Milewicz, MD, PhD, the President George Bush Chair in Cardiovascular Medicine at McGovern Medical School at UTHealth Houston and director of the John Ritter Research Program at UTHealth Houston.  The research program was founded by actress Amy Yasbeck, founder of the John Ritter Foundation and widow of the famous comedic actor, who died from a ruptured aneurysm.

“I wanted to be seen by the best to make sure we would be OK. They diagnosed me with Loeys-Dietz syndrome and suggested I get my boys tested too. I didn’t want my kids to have to go through what I went through,” Amy said. “My dissection weakened my vessels throughout my body.”

“Once we made the diagnosis, we knew we would have to monitor her sons to make sure we can prevent an aortic dissection or rupture that we knew would eventually happen,” said Milewicz, who is a professor and director of the Division of Medical Genetics, and vice chair of the Department of Internal Medicine at McGovern Medical School. “In people who have an aortic dissection, up to half die suddenly and never make it to the hospital. We can prevent these deadly dissections if we know who is at risk and manage it properly. The underlying genetic alteration can tell us who is at risk in the family but also when to do the surgery to prevent a deadly dissection from happening. We want to make sure that another dissection did not happen in the Fireck family, so we sent Ayden for surgery to repair the aorta to prevent the dissection. Our surgeons are great in fixing aortas without problems. This is why we do the research we do, to help people like the Fireck family.” 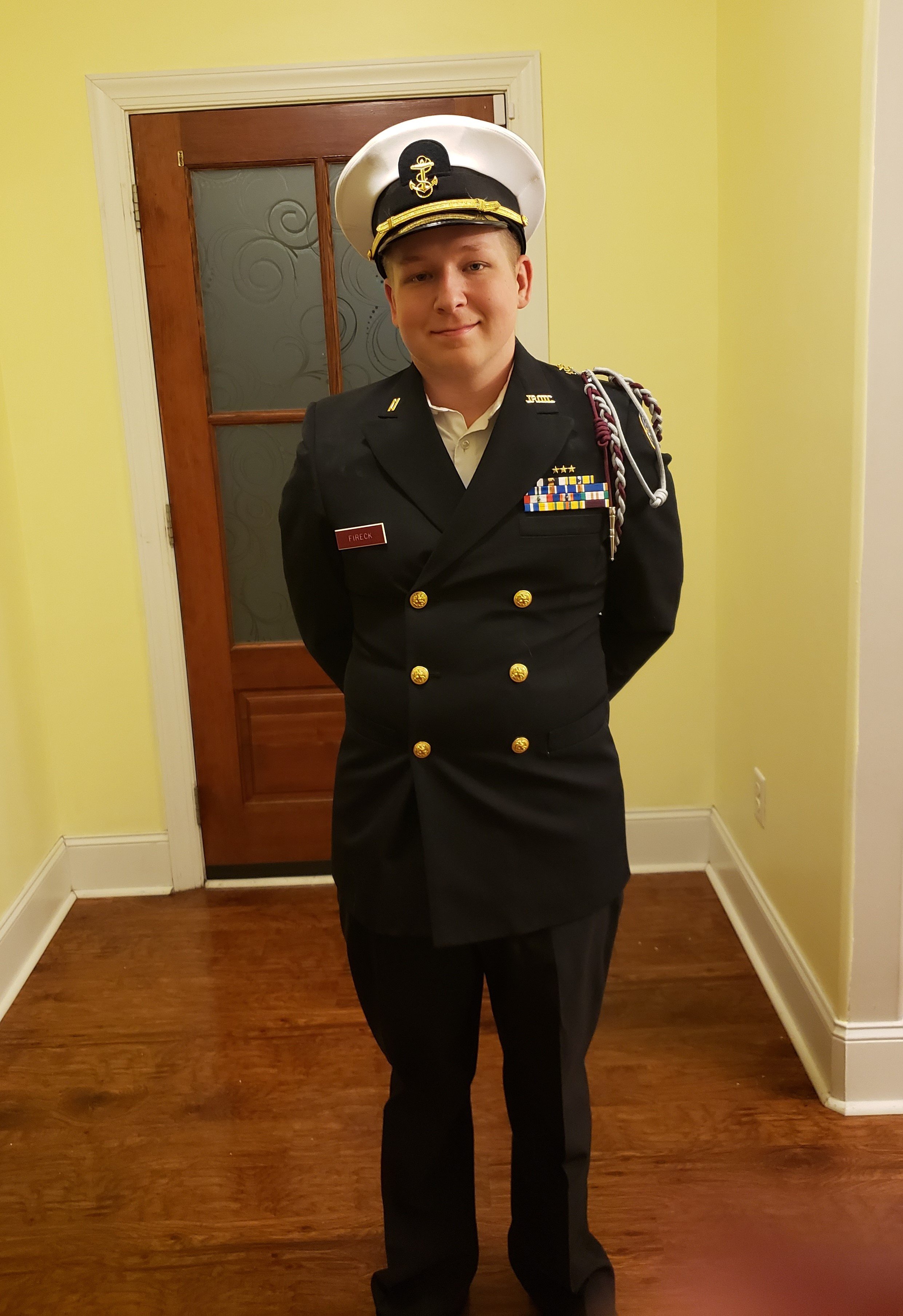 Ayden Fireck, 18, has plans of becoming a surgeon, just like those who saved his life, and enlist in the military. (Photo by Amy Fireck)

Physicians put a plan in place to regularly monitor Ayden’s aorta and when his aneurysm reached a size deemed dangerous, he underwent the surgery to prevent a deadly dissection in him.

“Our goal with Ayden was to prevent an aortic dissection from ever happening,” said Anthony Estrera, MD, professor and chair of cardiothoracic and vascular surgery with McGovern Medical School and an attending surgeon at Memorial Hermann-TMC. “We were able to remove the aneurysm to prevent Ayden from having a dissection, and by replacing his aorta, we were able to dramatically reduce his future risk of complications.”

Thanks to the work of comprehensive team, Ayden will now go on to live a normal and healthy life without having to worry about the risk of having an aortic dissection.

He has plans of becoming a surgeon, just like those who saved his life, and enlist in the military. Meanwhile, his ROTC drill team recently won first place at a regional competition, which meant marching and spinning a rifle with precision and ease.

“I look at what happened with my mom and everything that has happened with my family and I see how all of these medical professionals saved our lives. It inspires me to do the same for other people because my diagnosis and surgery definitely expanded my life span, and for that, I am forever thankful.”