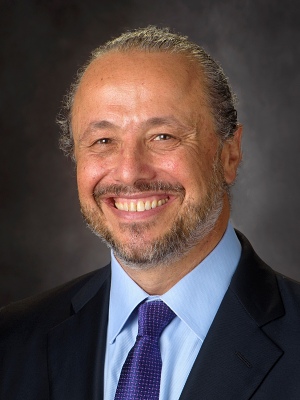 Alejandro Chaoul, PhD, leads the Tibetan Meditation program offered to members of the UTHealth community. Recently, the benefits of meditation were featured in the Houston Chronicle.

A group sits in a mostly empty room — some in their socks, one barefoot, a few on pillows, others on dull gray chairs — breathing. They inhale. They exhale. They chat. They savor silence.

On Tuesday mornings at MD Anderson, this is cancer treatment.

Sun spills through the blinds and throws precise rectangles on the floor, illuminating Alejandro Chaoul’s back as he leads the circle through meditation. On sheets of paper laid out in front of him, meditators have written down what they’re wrestling with. Anxieties, fears. Some have radiation scheduled later that week, others say they have trouble sleeping, even though it is their spouses who have cancer.

In addition to the physical effects of the disease, so much of this fight takes place in the mind.

Chaoul is a doctor, but of the PhD variety, having earned his doctorate at Rice University in Tibetan religion. He started teaching free meditation classes at the University of Texas MD Anderson Cancer Center as a volunteer 15 years ago, then worked part time through a research grant on Tibetan yoga for people with lymphoma before becoming full-time faculty. He never planned to work at a hospital, but his path mirrors what healing has come to mean in the health care world.

MD Anderson was among the first major cancer centers to look at “integrated medicine,” which marries biological treatments like radiation and chemotherapy with yoga, art and meditation. the hospital opened the Place … of wellness in 1998.

At first, it was more of a “side boutique,” driven by volunteers, said Lorenzo Cohen, who joined MD Anderson the year before with a background in research psychology.

Cohen studied how to track the impact of stress on the human body. He wanted to apply the same evidence-based practices of traditional medicine to the less visible parts of dealing with cancer. Patients were already exploring ways to cope with their illnesses, but few doctors were clinically studying it.

Eventually, MD Anderson opened the Integrative Medicine Center, which Cohen now directs, moving its services into the Mays Clinic, which also houses the Nellie B. Connally Breast Center and Laura Lee Blanton Gynecologic Oncology Center, among others. Rather than offering “complementary” services, Cohen said, he worked to break down the barriers between oncologists and people like Chaoul. Today, physicians can refer patients to a meditation class or a nutrition specialist on top of regular treatments.

What Chaoul prescribes are “meditation pills,” deep breaths taken to dose a stressful moment. And though he teaches that “meditation is medicine of the mind,” he’s also aware of how New Age-y that can come across.

“I found (the saying) in a really profound place — a tea bag,” he jokes.

One of the hardest parts about both cancer and the practice of Tibetan meditation, he said, is to recognize the impermanence of life. He asks patients and their caregivers to focus on the present.

As a boy, Chaoul said existential attacks would swallow him at night, alone in the dark of his room: “I’m going to die and then what?”

He said difficult events in his life, like his parents’ divorce, propelled him to seek out the spiritual. Not that Chaoul didn’t already have spirituality in his life. He was born Jewish in Catholic Argentina and attended a Presbyterian school before moving to India in pursuit of Buddhist teachings. His first job was in advertising, but he soon turned to Eastern philosophy.

At 24, he traveled to India and stayed for almost a year, finding Indian and Tibetan meditation teachers and practicing several hours a day. When he moved back to Argentina, he helped coordinate the Dalai Lama’s trip there and accompanied him to Chile and Venezuela. Eventually, Chaoul found his way to Houston.

His teachers encouraged him to start teaching, so he began giving classes at Ligmincha Texas, a Buddhist center in Houston. There, he encountered Maria Alma Rodriguez, an MD Anderson lymphoma doctor who asked him to teach at the cancer center.

Chaoul said his father always wondered what he was going to do with a religious studies PhD. In 1998, before Chaoul starting teaching at MD Anderson, his father became a prostate cancer patient there.

“My father is a businessman. He has a classic view of the world,” Chaoul said. “It’s not until he became a patient that he said, ‘What you’re doing is pretty neat.’ I wish he didn’t have to go through that to think that.”

His father survived the cancer, but still does not meditate.

At St. John’s Downtown, the Rev. Juanita Rasmus has eulogized several cancer patients. So when she learned she had a rare form of kidney cancer in 2009, her head was at once numb and spinning. Praying was hard when faced with death, she said, even for a pastor. The tumor was successfully removed, but each time checkups roll around, the anxiety returns.

“What the meditation class helped me to realize is that I’ve been holding my breath most of my life,” Rasmus said. “Working hard, trying to be a good girl, trying to please people. In many ways, the cancer gave me permission to care for myself first.”

Chaoul, 50, still practices Tibetan meditation by himself before the sun rises every day, but he also teaches nearly every day of the week, including classes for faculty and staff, medical students and the community at places like The Rothko Chapel, Jung Center, Ligmincha, Rice and the Asia Society. He has come to embrace working at the intersection of body and mind.

In class, it’s not quiet, a dull beep pulses somewhere else in the hospital, and the vents blow long, heavy blasts into the room. Distractions pull at our “monkey minds,” Chaoul tells the meditators, always swinging from thought to thought. There are so many outside things to notice – eyes flutter open when someone coughs – so focus instead on your breath, he advises; find grounding in yourself. Chaoul taps a bell, and the sound is so clear it circles the room.

For Naomi Rosborough, who has been attending Chaoul’s classes for years with her husband, a survivor of melanoma and prostate cancer, the meditation is not nirvana. But, she says, “it calms our spirits.”