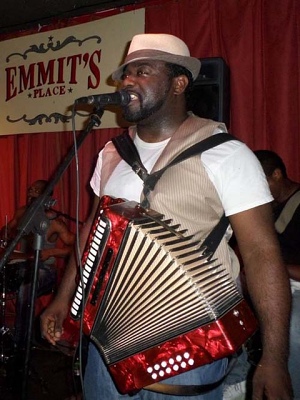 Carter provided an extensive history of zydeco, including the translation of the French word; snap peas. When Creole families would get together for feasts, the snap peas would make a rhythmic sound while being broken in preparation for the meal. The name was also the inspiration for Clifton Chenier’s hit “Zydeco sont pas sale” or the beans aren’t salty, which comes from a time in southern Louisiana when there was not enough salt for the green beans.

“Chenier talked about that,” Carter said. “He took old French songs that came from generation to generation, and he added rhythm. And thus, it has evolved into something great.”

Zydeco music has grown from what was a two-step number in the days of Chenier to completely different music based upon rhythm patterns. The music adds mixtures of rhythm and blues, blues, and rock and roll and adds the accordion to it.

Though other types of music use the accordion, Carter said what sets zydeco apart from the others is the common household appliance, the washboard. Families would get together to play music with an accordion and strum a washboard with spoons, knives, or any other object they could find to keep rhythm. The families would move furniture around living rooms and have La Las, or house dances, while playing zydeco music.

Zydeco has grown tremendously in popularity over the last few decades. Carter mentioned that in the beginning, in order to find zydeco music, you would have to go to a small club or a Catholic church in Louisiana. Today, you can go anywhere in south Louisiana and find zydeco, but you can also bands playing throughout Houston on any given weekend.

Carter said that people ask him all the time why he chooses to play zydeco on top of being an ordained minister and working with hospice patients. The simple answer, he says, is because it is his culture: zydeco defines who he is, and where he came from.

“I grew up in a household where most of my grandparents and elders all spoke Creole French,” Carter said. “When you’re a child that’s always around the grandparents, they will use the Creole dialect to say stuff they didn’t want the young people to hear, but I was always around, and I was nosy, and I picked up a lot of the French.”

Carter began playing the accordion at a young age but resented zydeco, because it was all any of his elders listened to: he was more interested in Al Green. However, as he grew older and reached his teenage years, he began to realize that he really liked that part of his culture.

Carter continues to embrace his culture by playing zydeco music and cooking traditional foods, and his children have picked up pieces of their heritage as well. His sons not only play the accordion and cook food traditionally, but they are carrying on the tradition of speaking Creole French as well.

“For me, what that does is shows that my generation is not being lost,” Carter said. “I’m passing the baton on to my sons so that they know what I came up with and that they can take it, and they can cultivate it. Times change. The music will evolve, and the music has evolved. The main thing for me is making sure that we preserve the cultural aspect of it.”

Carter has been able to use zydeco music in his professional life as well, using musical therapy for the hospice patients that he sees to give them a unique experience.

The next installment of the Arts & Resilience program features John Egan and the “Blues & Country Guitar” at noon Dec. 19 in MSB 3.001. The program is sponsored by the Dean’s Office in collaboration with the McGovern Center for Humanities and Ethics. For more information and a schedule, visit the program’s website here.