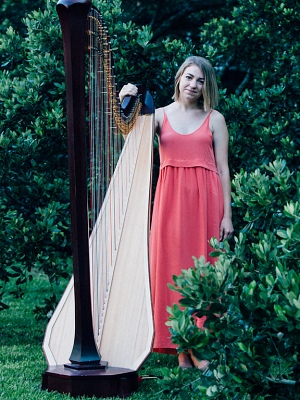 Gustafson opened her show with a piece from Claude Debussy titled “The Maid with the Flaxen Hair,” following that piece with “The Minstrel’s Adieu to his Native Land,” by Welsh composer John Thomas.

The harp has 47 strings and seven pedals, which is one pedal for every note in the octave. Gustafson explained that the footwork of the pedals is similar to the black keys played on a piano.

Gustafson wrapped her show with “Sarabanda e Toccata per arpa” by Nino Rota before finishing with four pieces of Carlos Salzedo’s “The Suite of Eight Dances.”

The next installment of the Arts & Resilience program features Erin Foster and the “Middle Eastern Music” at noon Feb. 20 in MSB 5.001. The program is sponsored by the Dean’s Office in collaboration with the McGovern Center for Humanities and Ethics. For more information and a schedule, visit the program’s website here.