Alzheimer’s disease transmission may be similar to infectious prion diseases 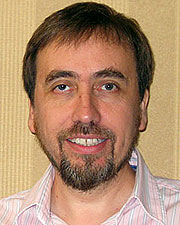 HOUSTON – (Oct. 4, 2011) – The brain damage that characterizes Alzheimer’s disease may originate in a form similar to that of infectious prion diseases such as bovine spongiform encephalopathy (mad cow) and Creutzfeldt-Jakob, according to newly published research by The University of Texas Health Science Center at Houston (UTHealth).

“Our findings open the possibility that some of the sporadic Alzheimer’s cases may arise from an infectious process, which occurs with other neurological diseases such as mad cow and its human form, Creutzfeldt-Jakob disease,” said Claudio Soto, Ph.D., professor of neurology at The University of Texas Medical School at Houston, part of UTHealth. “The underlying mechanism of Alzheimer’s disease is very similar to the prion diseases. It involves a normal protein that becomes misshapen and is able to spread by transforming good proteins to bad ones. The bad proteins accumulate in the brain, forming plaque deposits that are believed to kill neuron cells in Alzheimer’s.”

The results showing a potentially infectious spreading of Alzheimer’s disease in animal models were published in the Oct. 4, 2011 online issue of Molecular Psychiatry, part of the Nature Publishing Group. The research was funded by The George P. and Cynthia W. Mitchell Center for Research in Alzheimer’s Disease and Related Brain Disorders at UTHealth.

Alzheimer’s disease is a form of progressive dementia that affects memory, thinking and behavior. Of the estimated 5.4 million cases of Alzheimer’s in the United States, 90 percent are sporadic. The plaques caused by misshapen aggregates of beta amyloid protein, along with twisted fibers of the protein tau, are the two major hallmarks associated with the disease.  Alzheimer’s is the sixth leading cause of death in the United States, according to the Alzheimer’s Association.

“We took a normal mouse model that spontaneously does not develop any brain damage and injected a small amount of Alzheimer’s human brain tissue into the animal’s brain,” said Soto, who is director of the Mitchell Center. “The mouse developed Alzheimer’s over time and it spread to other portions of the brain. We are currently working on whether disease transmission can happen in real life under more natural routes of exposure.”