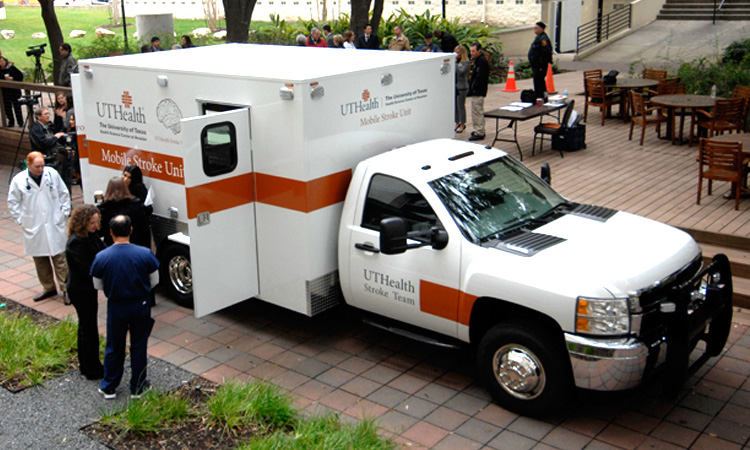 On board the ambulance is a computed tomography (CT) scanner that allows a mobile stroke unit team member to quickly assess whether a patient is having a stroke caused by a blood clot and if so, the clot-buster tPA (tissue plasminogen activator) can be administered. The stroke unit will be run in conjunction with the Emergency Medical Services of the Houston Fire Department, Bellaire Fire Department, and West University Fire Department.

Stroke occurs when blood flow to the brain is interrupted by a blockage or a rupture in an artery, depriving brain tissue of oxygen. It is the fourth leading cause of death in the United States and a leading cause of disability. According to the American Stroke Association and the Centers for Disease Control, nearly 800,000 Americans suffer a stroke each year – one every 40 seconds – and stroke costs the United States $38 billion a year. The only FDA-approved treatment for ischemic stroke, the most prevalent kind, is the clot-buster tPA, but it must be given within three hours of the first signs of stroke to be most effective, and the earlier the better within that three-hour timeframe.

“It typically takes roughly an hour once a stroke patient arrives in the emergency room to receive treatment. So if we can actually put the emergency room in the ambulance and take the CT scanner to the patient, we could treat the patient at the scene with the medication and save that hour,” said Dr. James Grotta, director of stroke research in the Center for Innovation & Research at Memorial Hermann-TMC and director of the mobile stroke unit consortium that also will include the stroke teams from Houston Methodist Hospital and St. Luke’s Medical Center, local businesses, and philanthropists. “That hour could mean saving 120 million brain cells.”

After observing a similar unit in Germany, Grotta, a longtime faculty member who served as chair of the Department of Neurology for seven years, had the opportunity to present his idea to UTHealth Development Board members. He was pleasantly surprised when a couple approached him and offered to help with the project after the meeting in March 2013.

That couple, John and Janice Griffin, are owners of Frazer Ltd., a third-generation, family-run Houston company that builds emergency vehicles. After looking at the needs of a mobile stroke unit, Frazer felt it would need to engineer a new unit from the ground up.

“We really liked the possibilities of moving medicine forward,” said Laura Griffin Richardson, CEO and president of Frazer. “Our company likes to push the limits and this had never been done before. We’re excited to be located in Houston, the forefront of the medical community. Once everyone sees the possibility of putting a CT scanner in an emergency vehicle, the question is what else can we do?”

Other local businesses, such as H-E-B and Gallery Furniture, along with philanthropists, also generously supported the mobile stroke unit, giving $1.1 million to McGovern Medical School for the scanner and personnel.

“The mobile stroke unit is one example of how UTHealth is advancing stroke treatment,” said Dr. Elizabeth Noser, co-principal investigator of the UTHealth trial that will measure outcomes and cost savings. “We anticipate that the decrease in stroke treatment time will translate to improved outcomes.” Noser is clinical assistant professor of neurology and the James C. Grotta, M.D. Chair in Neurological Recovery and Stroke at UTHealth.

The stroke unit will be located at The University of Texas Professional Building in the Texas Medical Center. It will respond to calls within a three-mile radius and patients will be transported to comprehensive stroke centers including Memorial Hermann-TMC, Houston Methodist Hospital, and St. Luke’s Medical Center. It will carry a paramedic, neurologist, nurse, and CT technician and run alternate weeks as part of the clinical trial at UTHealth.

“We know we can speed up treatment but we don’t know how much that speed will affect recovery,” said Grotta, co-principal investigator of the study. “We really don’t have data on how receiving tPA within the first hour after symptoms start affects patient outcomes, including the amount of disability. This study will help us determine how much more helpful it is to receive tPA within that first hour.”

The clinical trial will include the telemedicine program that is part of UTHealth and the Mischer Neuroscience Institute at Memorial Hermann-TMC. Researchers will look at whether the telemedicine program, which physicians across the state use to consult with UTHealth/Memorial Hermann-TMC stroke experts, can be applied to the mobile stroke unit. If so, the unit might be able to respond to calls in the future using telemedicine, which could make it more cost-effective.

Trial runs should begin this month. The study, expected to last three years, is scheduled to begin in March.