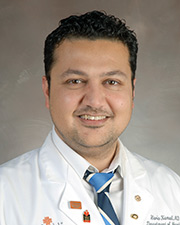 Dr. Haris Kamal graduated medical school with honors at Yerevan State Medical University in Armenia. Subsequently, he completed a year of medical internship at a state hospital in New Delhi, India. He developed an interest in cerebrovascular disease during his rotation at the Gates Hospital in Buffalo, NY. After completing residency in Neurology where he served as the Chief Resident at the State University of New York at Buffalo, Dr. Kamal pursued a Vascular Neurology fellowship at UT Houston. He is board certified
by the American Board of Psychiatry and Neurology.

Dr. Kamal received the Micheal E. Cohen resident research award for best research project two years in a row at SUNY Buffalo. He is also a recipient of the Edward Fogan Resident Award for the highest standards of neurological practice and compassionate care, the American Academy of Neurology Fellow Travel Award, the American Society of Neuroimaging Resident Travel Award and the UT Houston Fellowship Teaching Award. He was also inducted to the Gold Honor Humanism Society during his residency.

Dr. Kamal enjoys clinical research in cerebrovascular disease and has authored multiple abstracts, publications and book chapters which have been presented at national and international conferences.

Acute stroke management and treatments have developed by leaps and bounds in the past 2 decades. The quest for selecting the appropriate patients for the right therapy is greater than ever now. Dr. Kamal’s research interests are to develop pathways based on clinical and imaging factors which can help delineate the best treatment and care plan for each patient individually presenting to the hospital.