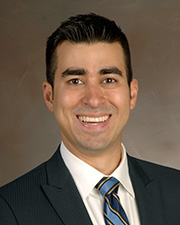 Dr. Omar Dimachkieh is an Assistant Professor in the Department of Orthopedic Surgery at McGovern Medical School at UTHealth Houston.

Dr. Dimachkieh specializes in hand and upper extremity surgery with an emphasis on disorders of the hand, wrist, and elbow. His expertise includes the latest and most advanced techniques for minimally invasive surgery and reconstructive treatments, as well as nonsurgical management and rehabilitation.

Dr. Dimachkieh is a native Houstonian and has called Houston his home for over 30 years. Out of high school, he was admitted to the highly competitive Rice-Baylor Medical Scholar Program. At Rice University, he was selected for membership in the Phi Beta Kappa honor society.

During residency training, Dr. Dimachkieh was honored with the Resident Physician Teaching Award, given to the resident physician that performs as an outstanding educator of medical students. He was also elected by his peers to the prestigious Alpha Omega Alpha medical honors society, an honor given to a single resident physician per year, for exemplary service to the medical community.

He continued his subspeciality training, completing a Hand and Upper Extremity surgery fellowship at the University of Colorado, where he received advanced training in common as well as complex hand and upper extremity injuries and conditions. Dr. Dimachkieh performs the latest procedures in hand and upper extremity surgery, including endoscopic carpal and cubital tunnel releases, tendon and nerve repair, arthroscopy, fracture fixation, and joint reconstruction and replacement.

Dr. Dimachkieh is a member of several professional organizations, including the American Academy of Orthopedic Surgeons, the American Society for Surgery of the Hand, and the American Association for Hand Surgery.