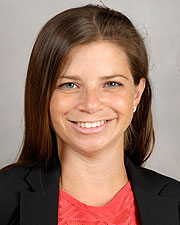 Laura Farach, MD, assistant professor of pediatrics, received grants from the Department of Defense (DoD) Military Medical Research and Development and the TS Alliance to develop a risk prediction model that can provide a personalized risk of seizures in patients with tuberous sclerosis complex (TSC).

Farach received $450,000 from the DoD, plus $10,000 and approximately 150 samples from the TS Alliance for her grant titled “Developing a Genetic Risk Prediction Model for Epilepsy in Patients with tuberous sclerosis complex.”

TSC is present in one in every 6,000 newborns. While the disease can be hereditary, most occurrences of the faulty gene are first found in the affected individual. Children who inherit TSC from parents may have either milder or more severe cases of the disorder. TSC causes benign tumors to grow in vital organs and can affect the central nervous system.

“There is variable expressivity in TSC, so some people have certain features, while other people have others,” Farach said. “The reason for the differences in seizures is unknown. Tumors are thought to be due to the second-hit hypothesis, but the other neurological issues: why some people have worse seizures than others, most of that is unknown. My study is to look for modifier genes. We know TSC1 or TSC2 causes TSC, but we have 20,000 genes, so there may be other genes in the body that are either making you at higher risk or lower risk of seizure.”

Modifier genes have been found for other genetic disorders, Farach said, but the concept is new for TSC.

“We’re making a risk-prediction model based on what we already know about the risks for seizures, and then we’re genotyping around 500 or 600 samples of people with TSC, and then looking at 22 genes to see if there are changes in those genes that correlate with having a higher or lower risk of seizures.”

Farach’s risk prediction model is rooted in epilepsy because of the objectivity as to whether a person has the disease or not. Treatments exist for specific types of epilepsy, so if a gene already known to cause epilepsy is found to increase risk of seizures in TSC, a drug may already be associated with it, leading to a possible treatment.

“The ultimate goal is to be able to give prognostic information to a family,” Farach said. “I’m mostly clinical, so I’ve seen patients with TSC who are having horrible seizures, and at the same time you will see people who are just walking around normally. So, [with this model] we’ll be able to provide those parents what to expect for their child to give them reassurance and have them be less stressed in that period of time.”

Farach received her doctorate of medicine from Jefferson Medical College in Philadelphia and joined McGovern Medical School first as an intern in pediatrics before completing her residency in pediatrics and medical genetics and signing on as faculty in 2015.