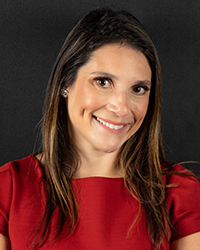 Meyers will receive the award at the 35th annual National Association of Neonatal Nurses (NANN) conference Oct. 9-12 in Savannah, Ga.

“It is such an honor to be receiving this award from the largest and most influential neonatal national organization,” Meyers said. “To be able to see all of the hard work and long hours spent away from my husband and kids come to fruition is really exciting.”

An NNP Rising Star exemplifies passion for their work and is making a large impact in a short time through exemplary practice, leadership, service, and education. Rising Stars contribute to the growth of the profession in the early stages of their career by engaging in projects, publications, activities, and initiatives that demonstrate achievements that have sustained and positive impact on their institution and the profession as a whole.

“I could not have accomplished any of this without the support of my family and the amazing team of neonatal nurse practitioners that work alongside me,” Meyers said. “I’m thrilled to be representing UTHealth and Children’s Memorial Hermann Hospital.”

Meyers joined McGovern Medical School in June 2013 after graduating from the UTMB School of Nursing with a master’s of science in nursing. She became the clinical manager for the UT Physicians neonatal nurse practitioners in 2018 at the height of the NICU expansion into the community. Meyers is currently a member of the 2019-20 Emerging Leaders Fellowship cohort coordinated by the NANN and Synova Associates.

The NANN is a community of registered nursing professionals at all stages of their careers who care for newborn infants born with a variety of health challenges. For more than 30 years, NANN has supported its members and advanced the profession by providing opportunities for members to influence care, collaborate with leaders in the field, and gain knowledge to improve their daily practice.