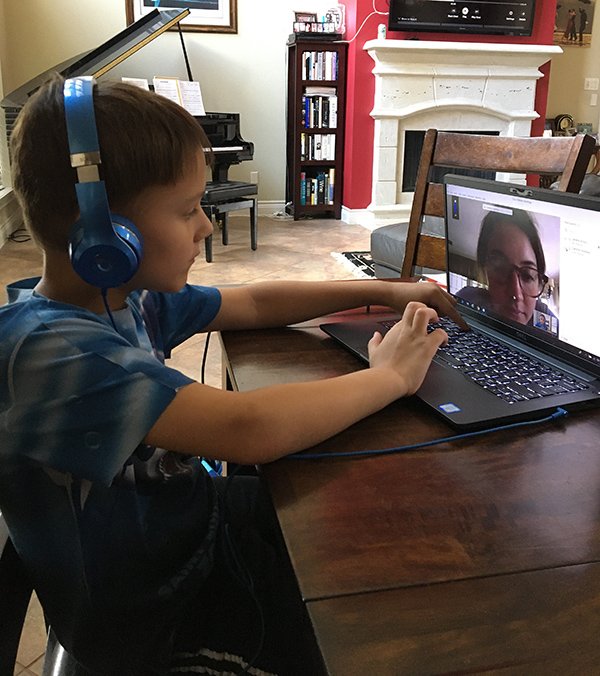 “I swim in hot weather,” said 6-year-old Owen McKay during his virtual speech therapy session with Caroline Andrews, a student of McGovern Medical School at The University of Texas Health Science Center at Houston (UTHealth).

Just a few weeks ago, the “s” sound in “swim” and “th” sound in “weather” were difficult to pronounce for Owen, who was diagnosed with an articulation disorder when he was 4 years old. Now, he can say them both well, thanks to his daily sessions with Andrews.

He had been making progress with speech therapy through his school district, but with schools closed across the nation due to COVID-19, his parents were concerned that he would fall behind in his speech development.

“Owen’s therapist gave us lists of his exercises and sounds to work on at home, but after the first week or two my son was getting frustrated with mom and dad,” said Sandra McKay, MD, Owen’s mom, UT Physicians pediatrician, and assistant professor of pediatrics with McGovern Medical School at UTHealth. “We were parent and teacher already, so also being speech therapist was difficult.”

Andrews was finishing up her first year of medical school when the virus hit, and she quickly stepped in to help by volunteering to tutor through McGovern Medical School’s Covert Undercover Virus Response Team. The group was created by students to ease the burden of front line attending physicians and residents by collecting personal protective equipment for them and offering tutoring for their children as school went virtual during COVID-19.

“I’ve felt helpless during the pandemic and thought this would be a tangible way to help out,” said Andrews. “At first I was nervous about teaching speech therapy because I’d never done it before. But with a little Googling and tools from Owen’s therapist, I was able to learn it and our sessions have been going great.”

Since Owen has started his daily 15-minute sessions with Andrews, he has surpassed milestones that McKay feared would be put on hold during the pandemic, including flawlessly making challenging sounds in regular conversation, something his speech therapist praised during his most recent virtual evaluation.

“This is a huge step because he was not able to make the ‘s’ or the ‘th’ sound without being reminded prior to working with Caroline,” McKay said. “We are so happy about this achievement because with COVID-19, I thought for sure he would regress, and lose the speech progress he had made – I never thought we would actually be able to make progress during this time!”

“I’m thrilled with Owen’s progress, but I also feel like I didn’t do much. It just goes to show that kids really do want to work hard and do their best, and they respond well to teaching that comes from a new person that they don’t interact with all the time,” Andrews said. “Working with Owen through the response team has confirmed my desire to go into pediatrics and build more relationships with children to help them grow and improve.”

“McGovern students were eager to donate their time to help,” Yin said. “We matched student volunteers with faculty, fellows, and residents to provide needed service such as child care, pet sitting, or errands until normal operations could resume.”

“The program has been such a blessing for our family. I continue to be amazed at how our students have been stepping up during this time of adversity,” McKay said.