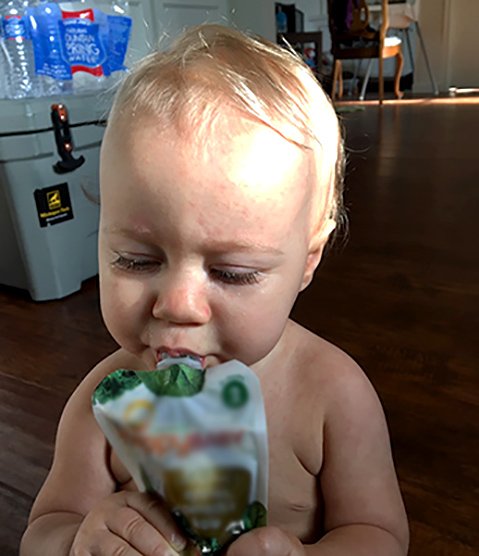 Baby with roseola rash, which occurs as the second part of the virus after the high fever. (Photo by Amy Laukka/UTHealth)

It’s the middle of the night and your baby wakes up crying. You already know they have a fever by the heat coming from their head, but the number on the thermometer, above 104 degrees, prompts a wave of fear to sweep over you. All you’ve heard about since March has been the dangers of COVID-19 and you wonder if the virus has finally invaded a loved one in your home.

This is the scenario an increasing number of parents are facing as summer has turned to fall and day care facilities and schools start to reopen. But doctors urge parents to stay calm.

“While COVID-19 is certainly still a serious concern, there are lots of other viruses that occur this time of year in children,” said Sandra McKay, MD, a pediatrician with UT Physicians and associate professor of pediatrics with McGovern Medical School at The University of Texas Health Science Center at Houston (UTHealth). “Not every illness right now in pediatrics is COVID-19, but that is definitely something that doctors will want to rule out. The important thing to remember is when you start to notice high fever or other symptoms, don’t panic, and contact your pediatrician.”

A common virus that McKay said has been circulating lately in patients younger than 3 is roseola. Children with roseola typically experience a fever for a few days and at some point, a spike that sends the fever greater than 104 degrees. Between one and three days after the fever breaks, they’ll experience a full-body rash, making the illness difficult to diagnose until the rash presents.

“Roseola can cause fluid in the ears, but there’s no way to tell by simply looking if that fluid is from a viral or bacterial infection. So, it is commonly misdiagnosed as an ear infection until the rash presents,” McKay said. “Roseola can be frustrating for parents in that sense, especially if the patient was prescribed an antibiotic for the suspected ear infection – it raises the question of whether the rash is a reaction to the antibiotic or if it was roseola all along. The good news is, roseola rash is a classic case for pediatricians – it is well described in literature so it’s easy to recognize at that point.”

While the rash looks alarming, the child is typically not bothered by it, McKay said. Children with roseola typically don’t exhibit any other symptoms beyond the high fever and rash.

“Roseola is very common – it shows up every year during late summer,” McKay said. “It does seem a little later this year, likely because of the quarantine and kids not being out as much over the summer. Most kids will have roseola at some point in their early years. There is no specific treatment for roseola – it’s just something that has to run its course.”

Other viruses that commonly occur this time of the year are influenza, adenovirus, and hand, foot, and mouth disease. If you start to notice a fever in your child, McKay has the following advice:

“A fever is something to contact your pediatrician about, but there’s no magic number that makes me extra concerned. I say the fever is too high when the child is not acting right, like when they have a fever and they’re lethargic, not eating and drinking, etc. With COVID-19 you don’t want to say, ‘I’ll just watch it.’ Go ahead and reach out to your provider,” McKay said.

Administering the appropriate amount of children’s acetaminophen or ibuprofen can help knock the fever down. She cautions against giving the child a cool bath.

“Studies show a cool bath or using rubbing alcohol for a child with a high fever can actually induce a seizure, so instead we recommend a lukewarm bath for kids with a high fever,” McKay said.