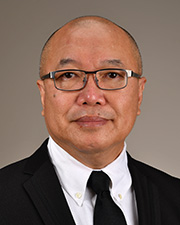 Roy is originally from the Philippines. Born and raised in Manila, his family immigrated to the US when he was in his late teens. Aside from being a CCP, he is also a Registered Respiratory Therapist and had worked for 13 years in pediatric and neonatal intensive care prior to becoming a perfusionist. He studied nursing at the University of Santo Tomas originally, then switched to pre-medical studies at the Colegio de San Juan de Letran in Manila. He obtained his Bachelor of Science degree in Respiratory Therapy at UTHSC in Houston, where he also got his training at Texas Heart Institute’s School of Perfusion. He joined UT Health in summer of 2020.