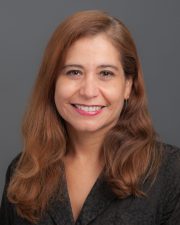 Consuelo Walss-Bass, Ph.D., is on a quest. Currently, she is Associate Professor in the Department of Psychiatry and Behavioral Sciences at McGovern Medical School. But her journey began about 12 years ago, when she started working with an isolated valley in Costa Rica, an ideal place to study psychiatric genetics. Studying the isolated population in the Costa Rica allowed her to narrow her focus to one gene—and more specifically, its mutations—connected to schizophrenia.

Researchers, including Dr. Walss-Bass, constantly remind us that there’s not one single gene or mechanism that’s solely responsible for schizophrenia, or any mental disorder. In fact, multiple mechanisms and sequences of chemical processes are involved. But investigating key genes, and their affiliated proteins, offers an entry point for further investigation and comparison.

After she identified a mutation in Neuregulin-1 (which is both a gene and a protein) associated with schizophrenia in Costa Rica, she began to ask “What is the role of this gene/mutation in this brain disorder?” With that question, the direction of her research changed from the field of “psychiatric genetics” to that of “functional genetics.”

Now, Dr. Walss-Bass is tapping a new technology that can convert a person’s skin or blood cell samples into neurons that are identical in DNA sequence to the person’s brain cells. (Essentially, the sample skin/blood cells are reprogrammed to become stem cells, and from there are transformed to become brain cells, or neurons.) This revolutionary technology empowers researchers, for the first time, to study living neurons belonging to the patient but independent of the brain itself.

“This new technology, developed in the past five years, is not main stream yet, but many universities have begun using it,” explains Dr. Walss-Bass. “It will revolutionize psychiatry because it is the first time we can study live brain cells directly from the patient.”

Her cell-based studies will examine how the Neuregulin-1 genes act differently in cells from schizophrenia patients compared to those from control subjects. These questions, and their answers, may offer insight into even bigger questions, such as:
• How are genetic mutations altering how cells function in mental disorders?
• What is the significance of interactions between genes and the environment? For example, a mutation may have occurred in schizophrenia patients so that, when exposed to a stressful environment, they may not be able to respond to stress with as much resilience.
• Environmentally, are genes changing (i.e., turning either off or on) in response to stress introduced into the environment? For example, schizophrenia patients’ immune systems appear to be altered by exposure to infections. Compared to healthy subjects, this suggests that an infection may trigger the disease in those with schizophrenia.

Answers to these questions may offer a first glimpse at a roadmap for exploring and treating psychiatric disorders. “The good news is that the answers for one type of disorder may be applied to others,” says Dr. Walss-Bass. “The same methods can be used to explore many psychiatric disorders.”

As research reveals more insight into these inner workings, researchers are becoming increasingly convinced that mental disorders occur on a spectrum, with the similar molecular pathways altered for schizophrenia, bipolar disorder, depression, autism and other disorders. In the long run, focusing on one pathway that the genes are affecting may shed light on—and bring solutions for—all the others.