Soares named president of the International Society for Affective Disorders 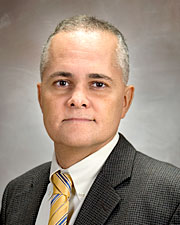 Jair C. Soares, MD, PhD, professor and Pat R. Rutherford, Jr. Chair in Psychiatry in the Department of Psychiatry and Behavioral Sciences at McGovern Medical School, has been named the new president of the International Society for Affective Disorders (ISAD).

He will officially assume the position at the joint meeting of the 9th Biennial Conference of the International Society of Affective Disorders and the 2018 Houston Mood Disorders Conference on Sept. 20-22. During his two-year term as president, Soares will work to expand and strengthen the organization’s network of researchers, clinicians, trainees, and advocates, particularly in North America. His other contributions will include cultivating international research collaborations in mood disorders, promoting the dissemination of research, and increasing understanding and awareness of mood disorders through education and advocacy.

Soares, who joined UTHealth in 2009, serves as the executive director of UTHealth Harris County Psychiatric Center. He is also the director of the Center of Excellence on Mood Disorders, which focuses on the search for causes and development of new treatments for mood disorders. The center is comprised of an active research team, who specializes in clinical neurosciences (neuroimaging, neurophysiology, cognitive neurosciences, and genetics), as well as clinical psychopharmacology and interventions research.

Soares has received numerous honors and awards, including the National Plaque of Honor, Republic of Panama, the Devereux Clinic Emy Award and the Harris Health Presidential Award of Innovation. He has published more than 200 peer-reviewed articles and book chapters in the psychiatric literature and has held editorial positions on a number of national and international medical journals. Since April 2015, Soares has been the co-editor in chief for the Journal of Affective Disorders, the official journal of ISAD.

Founded in 2001, ISAD is an international, multi-disciplinary organization dedicated to improving research, care and advocacy for mood disorders.